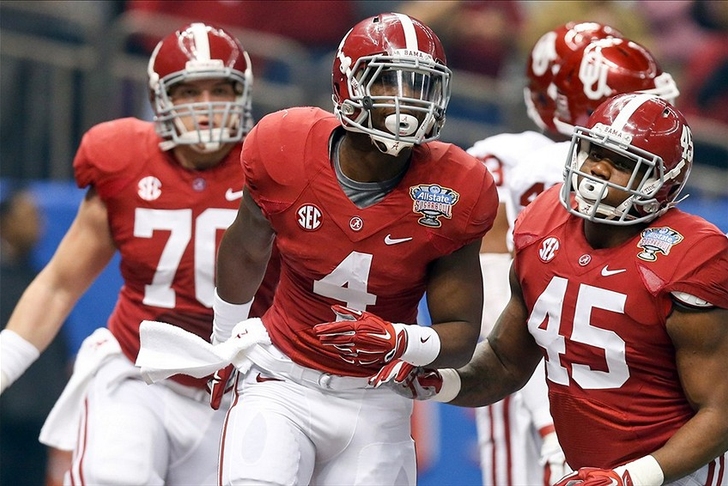 Alabama kicks off the 2014 season playing host to West Virginia. In the schools' first ever meeting, the Crimson Tide are looking to start off their season on a positive note after dropping their final two games of the season last year.

West Virginia will look to pull off an unprecedented upset over the Crimson Tide after finishing last season with a 4-8 overall record.

Alabama Outlook: The Crimson Tide head into the 2014 season as the #2 team in the nation. With tough losses to Auburn and then Oklahoma in the Sugar Bowl fresh in their memory, Alabama will look to put their disappointing end to last season in the rear-view mirror.

McCarron is gone, leaving the offense to senior Blake Sims and junior Jake Coker. Despite the turnover at quarterback, this offense is still absolutely loaded with playmakers. Junior running back TJ Yeldon comes into the season as a Heisman hopeful after posting 1,235 yards and 14 touchdowns last season.

Junior receiver Amari Cooper is also on course for a bounce-back campaign after his 1,000 yard freshman season regressed to 736 last year - Cooper missed two games and spent much of the 2013 season limited by injuries, but he's now fully healthy and ready to get back to work.

West Virginia Outlook: The Mountaineers finished last season with a 4-8 record, despite a strong season on offense.

Former RB Charles Sims is now in the NFL, leaving West Virginia with over 1,000 rushing yards and 11 scores to make up for. Senior quarterbacks Clint Trickett and Paul Millard helped the offense finish in the top 40 in passing yards last season, and one will need to step up and assert himself this year.

The biggest improvement will have to come from the defense. After allowing over 33 points per game last season, the Mountaineers will have much more success if they don't find themselves in shootouts every week.

What to watch for: Both teams have had to replace key starters on both sides of the ball, but it's clear that Alabama is in a much better situation coming into this game.

West Virginia faces the daunting task of trying to stop an almost comically loaded Alabama offense, but keeping pace against one of the best defenses in the country also poses a major challenge.

Expect the Crimson Tide to jump out to a big lead early on, while the Mountaineers spend most of the game playing from behind.

A final look at Sims, Coker before opener

'WVU ballcarriers can play in the SEC' says Seider

The Crimson Tide are too skilled and too well-disciplined to lose this game. Nick Saban has been good at avoiding trap games and upsets, and the key is his emphasis on preparation. While the new pieces on offense might take time to replicate last year's success, the talent gap between these two teams means it won't really matter against WVU. If the Mountaineers put up points in this game, they probably won't come until long after the contest has been decided.