Alabama vs. Tennessee Preview and Prediction 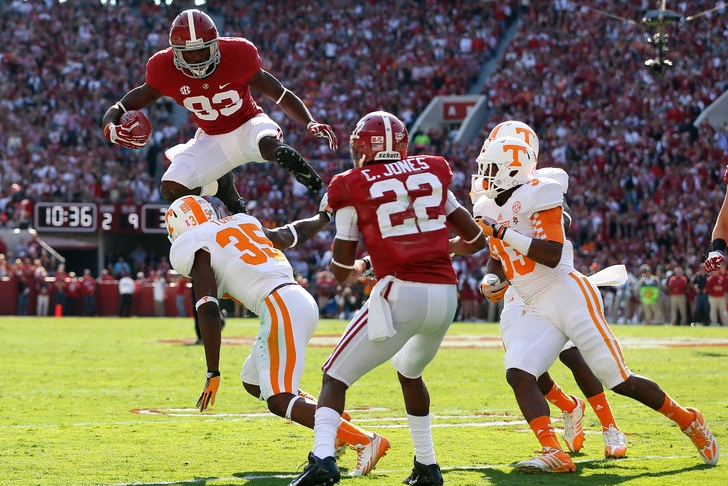 The Crimson Tide travel to Tennessee to take on the Volunteers, looking to build off their dismantling of Texas A&M last week.

Alabama will try to secure a win before they face three top 25 teams in the coming weeks, while Tennessee faces their second straight top five team after losing to Ole Miss last week.

As unexpected as that outcome was, Alabama will take it after a loss to Ole Miss and a one point win over Arkansas in previous weeks.

Receiver Amari Cooper is closing in on 1,000 yards - he comes into play with 908 receiving yards and seven scores.

Tennessee Outlook: The Vols hung around against Ole Miss, but late turnovers led to a lopsided fourth quarter in the 34-3 loss.

The offense hasn't been good for Tennessee, scoring just 44 points in their three SEC games - 32 coming in the loss to Georgia.

Quarterback Justin Worley has thrown for 1,579 yards and 12 scores, but has logged eight interceptions.

What to watch for: This game is set up for another blowout based on how these teams played last week, as well as the previous meetings.

Still, the Crimson Tide offense was struggling mightily before last week, so the Vols will look to once again slow down Alabama's attack. If Tennessee's defense can't perform, the Vols don't have the offense to compete.

Coach Saban can relate to what Lane Kiffin will experience at Tennessee (AL.com)

The Crimson Tide need to secure a victory in this game with a brutal stretch of games coming up at the end of the year.

Tennessee played the closest 34-3 game in history last week, but they did hang around against Ole Miss until the fourth quarter, so this game won't be a cakewalk for 'Bama.