Alabama vs. Missouri Preview and Prediction 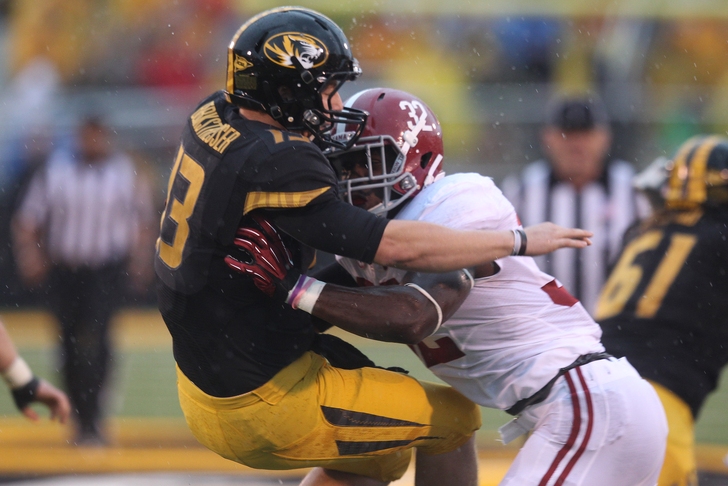 The SEC Championship Game is set as the Alabama Crimson Tide take on the Missouri Tigers in a battle for the conference crown.

Alabama Outlook: The Crimson Tide have staked their claim to the top spot in the nation, reeling off seven straight wins coming into the SEC Championship. The Tide still need a win here to secure a spot in the College Football Playoff.

Amari Cooper has dominated the competition this season, posting 1,573 receiving yards and 14 touchdowns to lead the Tide. Meanwhile, quarterback Blake Sims has thrown for 2,988 yards and 24 touchdowns since winning the starting spot early in the year.

The defense has been just as impressive, allowing 16.9 points per game - a stat that's only outlier is a 44 point effort from Auburn last week.

Missouri Outlook: Missouri posted six straight wins to climb in the standings and secure a spot in this SEC Championship Game, edging Georgia by a game in the SEC East.

The Tigers are led by sophomore quarterback Maty Mauk, who threw for 2,279 yards and 22 touchdowns this season. His leading receiver, Bud Sasser, has 904 yards and nine touchdowns to lead the Tigers in both receiving categories.

The Tigers biggest strengths have been running the ball, where they've averaged 176 yards per game, and preventing points, as they've given up just 19.7 per game.

What to watch for: How well can Missouri compete with the Tide early in the game? The Tigers pulled off a couple close wins over the likes of Tennessee and Arkansas the past two weeks, but needed second half rallies to come back in both games.

Alabama likely won't afford Missouri that opportunity if the Tide jump out to a big early lead.

The Tide are the more complete team and have been playing better football heading into this game. The Tigers need to start quickly if they have any chance of knocking off Alabama here.