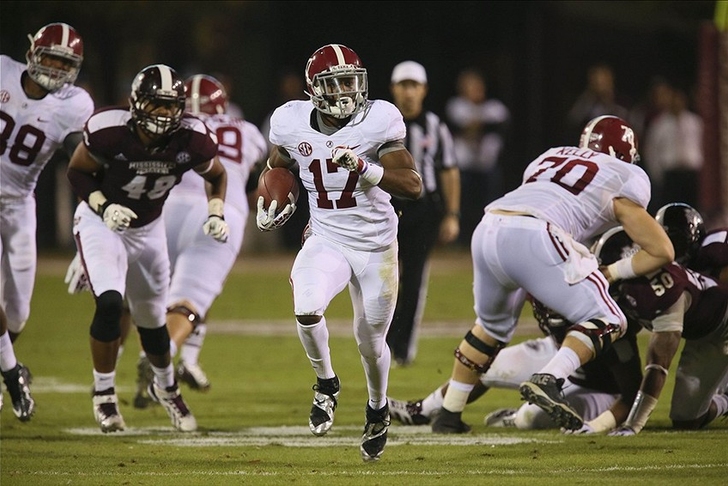 Alabama hosts Mississippi State for an SEC showdown that will have major implications on not only the outcome of the SEC, but the College Football Playoffs as well.

The Bulldogs come in as the top team in the nation, and a victory in Tuscaloosa could cement their place in the playoff rankings. The Tide can vault squarely into the national title picture themselves with an upset of Mississippi State.

Mississippi State has certainly earned their number one status though, as they have defeated three top-10 teams already this season, with the Tide and #10 Ole Miss still on the schedule.

The Bulldogs start and end with Dak Prescott, who has scored 29 touchdowns and posted over 3,000 total yards of offense this season. Running back Josh Robinson has come on strong as well, scoring 11 touchdowns and rushing for 984 yards.

Alabama Outlook: The Crimson Tide kept themselves in the playoff discussion with last week's overtime win at LSU.

Now the Tide can make a statement with a victory over the Bulldogs after the CFP rankings have Alabama outside of the playoff picture to date.

Quarterback Blake Sims only completed 20 of 45 passes against the Tigers, but his play has escalated over the last few weeks. He hasn't thrown an interception in four games, tallying 11 total touchdowns in those games.

What to watch for: Mississippi State's Dak Prescott is going to be the single biggest factor in this game. Prescott did not play in this matchup last year, so the Tide are getting their first extended look at the dual threat quarterback (he played in 2012 but threw just six passes).

Regardless of the rest of this game's elements, Prescott vs. the Tide defense is going to have the biggest impact. Quite simply, the winner of that matchup will likely be the winner of the game.

Amid outcry over CFP rankings, Saban says they still don't matter to him (AL.com)

How the SEC could get complicated come playoff time (Tuscaloosa News)

What they're saying - Mississippi State:

MSU not worried about being underdog at Alabama (SDN's Bulldog Blog)

The Crimson Tide can pull off the upset off the #1 Bulldogs if they continue to execute on the defensive side of the ball. The formula is simple on paper: if the Tide shutdown Dak Prescott they will win. If not, the Bulldogs will escape Tuscaloosa with a victory.