Alabama vs. LSU Preview and Prediction 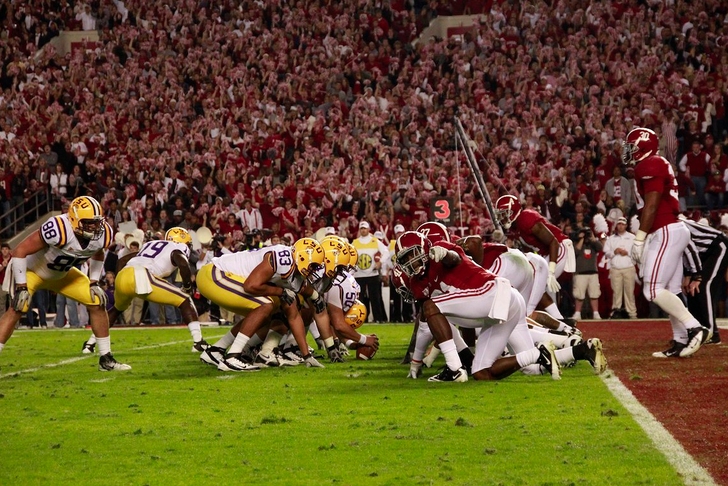 Alabama and LSU are set for a showdown in Baton Rouge on Saturday night. While both teams are chasing Mississippi State in the SEC West, a victory in this matchup will go a long way towards helping the case for a possible playoff spot at season's end.

Alabama Outlook: The Crimson Tide have won three straight after losing to Ole Miss, including a 59-0 blowout of Texas A&M.

Amari Cooper has taken off the past few weeks and now has over 1,200 yards receiving and nine touchdowns. Blake Sims has posted a 15/3 touchdown to interception ratio this season.

With games against #1 Mississippi State and #3 Auburn still looming, the Crimson Tide are in a must-win situation to stay in playoff contention.

LSU Outlook: The Tigers knocked off Ole Miss 10-7 to give the Rebels their first loss of the year. They will look to do it again this week, as LSU tries to rise in the rankings.

The Tigers two losses on the year have come to Mississippi State and Auburn, two of the top three teams in the nation.

Defensively, LSU has given up just 15.9 points per game this year, good for fourth best in the country.

What to watch for: How will LSU perform against another top five team this week? After beating Ole Miss, the Tigers will need to play another great game to defeat Alabama.

That responsibility will mostly come down on the defense, who held Ole Miss to just seven points. It may be too much to ask to expect this unit to have a second straight dominant performance, but if they can do it an upset is very possible.

Yeldon will 'for sure' play at LSU, Cam Robinson still uncertain (AL.com)

What they're saying - LSU:

Time to learn who these teams are (And the Valley Shook)

How does LSU defense slow down Alabama offense? (The Times-Picayune)

The Tigers can pull off their second consecutive win over a top five team by knocking off Alabama. The Crimson Tide have not played as well on the road, setting up LSU for the potential upset victory.