Alabama vs. Florida Preview and Prediction 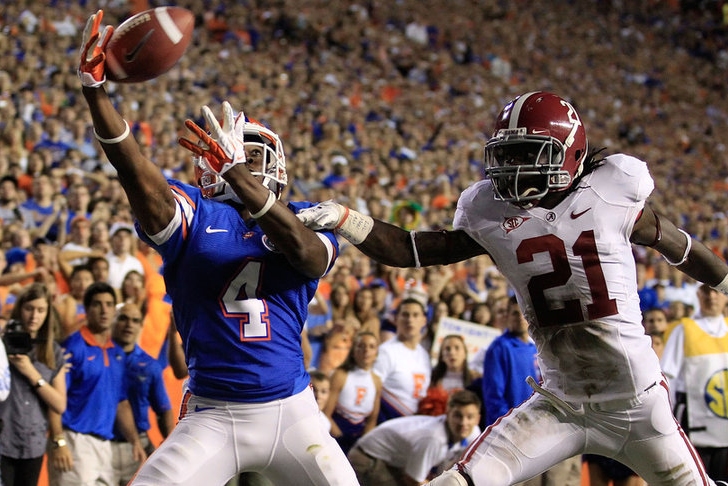 The Alabama Crimson Tide host the Florida Gators for an SEC showdown.

Both teams have been impressive in their games leading up to this matchup, and the winner will gain an inside edge in the early SEC standings.

Key stat: Florida's Demarcus Robinson matched a school record with 15 receptions in the win over Kentucky.

Alabama Outlook: The Crimson Tide seemed to have settled on a quarterback after Blake Sims took all of the meaningful snaps in last week's blowout over Southern Miss.

No matter who is under center, Alabama has been rolling right along to a 3-0 start. Outside of a 10 point win over West Virginia, the Crimson Tide have not had much competition this year.

Amari Cooper has also been unfazed by the official, but not official quarterback controversy, leading the way with 33 receptions for 454 yards and two scores.

Florida Outlook: The Gators are off to a 2-0 start after an overtime win against Kentucky last weekend.

Led by quarterback Jeff Driskel, Florida has posted the seventh most points per game with a whopping 50.5 average. They are also in the top 25 in passing and rushing yards per game.

What to watch for: Alabama will step up in competition after two cupcake matchups the past two weeks. Playing at home they should be fine, but the Gators defense possess a challenge for Sims and the Alabama offense, who have looked inconsistent at times.

Florida's shutdown corner Vernon Hargreaves will look to contain Amari Cooper and force Sims to find other receivers. If he succeeds, Alabama will have to lean more on running back TJ Yeldon.

What they're saying - Florida:

The Crimson Tide should keep their winning streak going at home, but this should be a much closer game than their previous two weeks. Even against a good Florida defense, Alabama has enough weapons offensively to find ways to score.

The Gators can hang around in this game, but going into Tuscaloosa and expecting an upset is a tall task.