Alabama vs. Arkansas Preview and Prediction 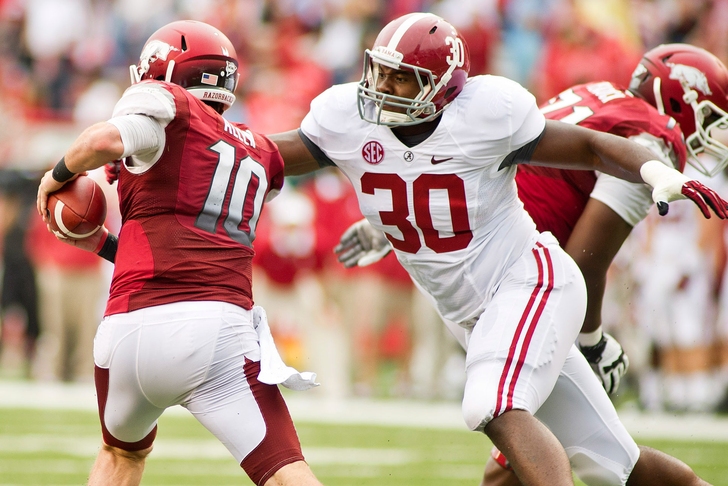 The Crimson Tide were upset at Ole Miss last week, putting a wrench in their plans for an FBS playoff spot.

This week they host Arkansas, a team that almost did the same to Texas A&M last week.

As a result, they slipped to #7 in the rankings heading into this matchup. Despite the loss, running back T.J. Yeldon ran for 123 yards, showing signs of life after three straight lackluster games.

Meanwhile, Amari Cooper had just 91 yards receiving, failing to cross the 100 yard mark for the first time all season.

Arkansas Outlook: The Razorbacks started a string of three straight top 15 opponents with an overtime loss to Texas A&M.

Arkansas got a big performance out of running back Alex Collins, who rushed for 131 yards and a score. He continues to lead a rushing attack that is averaging a whopping 316 yards per game.

Despite playing one of the toughest schedules in the country, the Razorbacks have hung in games against both Auburn and A&M.

What to watch for: Alabama is going to come out determined to put last week's loss behind them. To do so, they will have to get the offense rolling again. They moved the ball last week, but couldn't finish drives - that will need to change this week.

Arkansas will continue to pound the ball on the ground, meaning Collins and Jonathan Williams will be heavily involved.

Arkansas gave A&M a scare last week, so it's possible this game will be a nail-biter again. Alabama has a lot to prove after last week's loss, so look for them to turn things around in order to salvage any hope of a playoff spot.