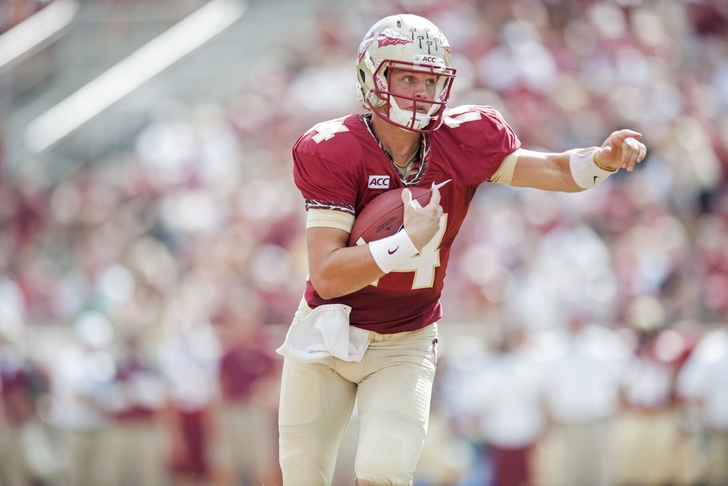 It looks like not everyone is a fan of Famous Jameis over at Florida State - backup QB Jacob Coker, who nearly committed to the Alabama Crimson Tide out of high school (the offer came in just too late) is seriously considering a transfer to Alabama, and the move could be finalized by the end of the week.

We know one thing absolutely for certain: Coker is leaving FSU. He still wants a shot at the NFL, and he might not get it if he spends another year stuck behind Winston. Alabama quickly established themselves as the clear frontrunner for Coker after word of a potential transfer got out, and a meeting with Nick Saban on Tuesday afternoon reportedly sealed the deal. WR Kevin Norwood accidentally spilled the beans on a local radio show two weeks before the official meeting when he mentioned "the guy coming in from FSU" being part of next year's quarterback competition on a local radio show.

Coker got some decent playing time in FSU routs before an injury suffered against Wake Forest ended his season in November, and there's a lot he would bring to the table at Alabama. A 2011 high school grad, Coker will have technically graduated before he transfers. That's great news for the Crimson Tide - it means he won't have to sit out a year, and having him come in and play right away would be a huge bonus to any program that lands him. He still has two years of eligibility left, so this wouldn't just be a one-and-done band-aid for Alabama's offense.

Coker is a pro-style quarterback who would fit seamlessly into Alabama's offense, especially now that Lane Kiffin is onboard. He may have lost out on the starting job at FSU, but he's no slouch - there's no shame in losing out on a starting job to one of the most impressive freshmen in recent history. If Coker comes to Tuscaloosa, the Crimson Tide will have a ready-made replacement when AJ McCarron graduates, and having someone with (albeit limited) playing experience will be a huge asset. FSU's dominance led to plenty of first-team reps for Coker, and playing against a live defense (even up by 30) is experience that'll serve him well down the road.

Coker's transfer may have been complicated because his family was still a little salty over the way Nick Saban recruited him. Apparently, they wanted an immediate, serious offer back during Coker's recruitment, and when Saban waited around and made moves on other prospects, the family ran out of patience and the player committed to FSU. Saban has been quoted as calling Coker's move a mistake, and given his situation on the Seminoles depth chart, it looks like Saban had a point.

The Mobile native looks set for Tuscaloosa, and the Crimson Tide have done well to go out and find a perfect successor to AJ McCarron.

9 Ways You Know You Went To Alabama

9 Ways You Know You're a Alabama Football Fan