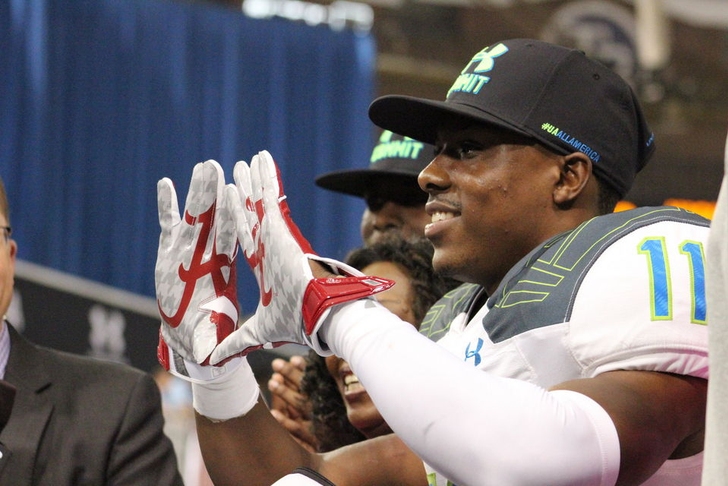 The Alabama Crimson Tide's season may have come to a disappointing end in the Sugar Bowl, but there’s plenty to look forward to as Nick Saban and the crew retool and reload for 2015 and beyond on the recruiting trail. Who’s on their way to Tuscaloosa? Who’s still deciding? All this and more in our recruiting roundup:

Five-star cornerback Kendall Sheffield's commitment to the Tide solidifies Nick Saban's defensive backfield of the future, along with fellow five-star corner Shyheim Carter. Both remain firmly committed to Alabama despite the Tide's loss to Ohio State.

“I am still solid (to Alabama),” said Carter, via 247Sports. “It was just the atmosphere there. The environment up there during the games and the people around the team, the team itself and the coaching staff. Being up there for the Auburn game, that was my first experience at the Iron Bowl, it was very exciting.”

"The deciding factor was Coach Saban and his record of sending players to the next level," said Sheffield's father, Cecil Sheffield.

Alabama's spring semester will start on Wednesday, January 7, meaning the football team's early enrollees are arriving on campus. Quarterback Blake Barnett, the No. 1 dual-threat quarterback in the 2015 class, and safety Ronnie Harrison, the No. 10-ranked safety prospect, are among those who arrived in Tuscaloosa early.