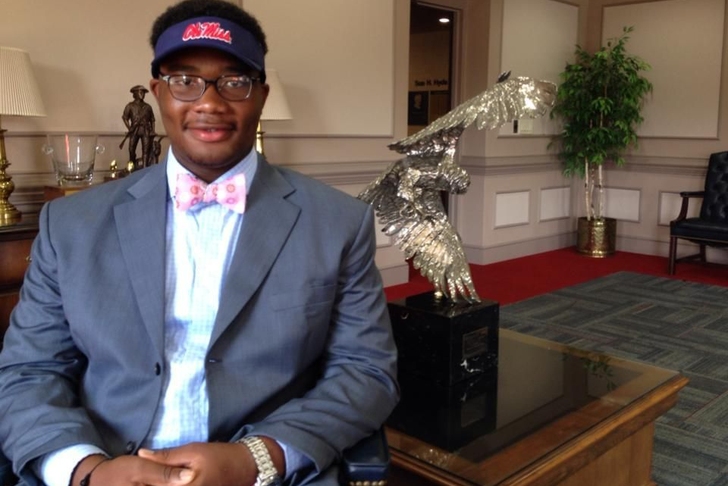 Nick Saban has less than a week to finalize Alabama's 2015 Recruiting Class, and he's working overtime to make sure the #1 class in the country ends up even stronger than it is today.

Alabama currently has four guards in their 2015 recruiting class, but just one tackle - after some late drama involving Maryland OT Isaiah Prince (after pledging his future to the Tide, he backtracked and now plans to make his decision on National Signing Day), 3-star OT Matt Womack is currently the only natural tackle holding down the fort. Nick Saban has zeroed in on Ole Miss commit Drew Richmond as a possible option, and assistants Mario Cristobal and Billy Napier have been making a late push to secure his signature.

Richmond is a 4-star out of Memphis Tennessee, and he originally committed to Hugh Freeze and the Rebels back in September. The 2014 Tennessee Mr. Football Division II Class AA Lineman of the Year stands at 6'5, 310 lbs, and he was in Tuscaloosa for the Iron Bowl in late November.

Alabama isn't the only team making a late charge for Richmond - Tennessee is also very much in the hunt, and he plans to visit the Vols and Longhorns before national signing day. Richmond was set for an official visit to Tuscaloosa a few weeks back, but a death in the family forced him to cancel. Coaches are still trying to reschedule something for the next few days, but it remains to be seen if they'll be able to fit something in.

Stay tuned to our Alabama Football page for the latest on this story and more.