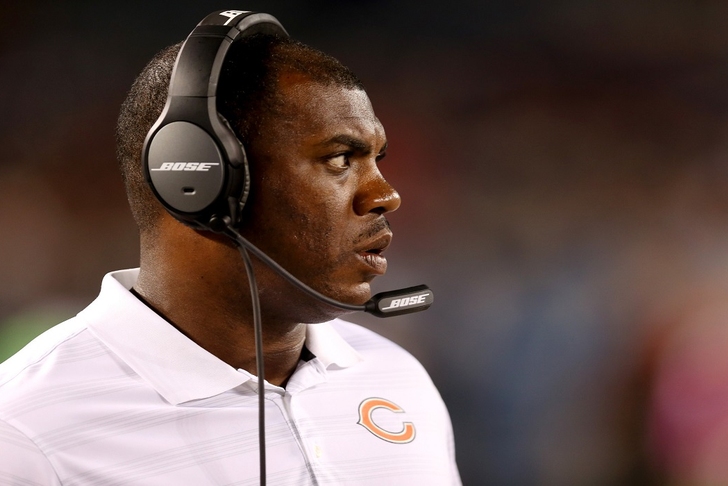 Think having the #1 recruiting class for the fifth straight year is making Nick Saban and the Crimson Tide complacent? Then you haven't been paying attention...

The Tide made two key hires this weekend - first, Tosh Lupoi was promoted to outside linebackers coach, and then former Chicago Bears DC Mel Tucker was named defensive backs coach.

Let's start with Lupoi. The youngest assistant in the NCAA when hired by Cal at 26 in 2008, Lupoi immediately made his presence felt on the recruiting trail. He was named Rivals.com recruiter of the year in 2010, and continued to make waves at the University of Washington in 2012 and 2013. Allegations about improper benefits to recruits were raised, forcing him to leave the Huskies, but he was cleared after the damage had already been done.

Lupoi - who had already been in Tuscaloosa since April as an 'intern' - will be a massive asset to Alabama's west-coast recruiting. Like Lane Kiffin, he has connections up and down the West Coast, but his defensive background makes him a complement to Kiffin rather than more of the same.

Tucker is another absolute steal. While Bears fans weren't enamored with his play-calling, his resume makes him vastly overqualified to be a position coach in college. Tucker has seven years of experience as an NFL DC under his belt, and his midwest roots add another few states to Alabama's vast recruiting range. Tucker was willing to turn down NFL jobs because of his connections to Nick Saban - he got his first coaching job under Saban at Michigan State, and later followed him to LSU before leaving to join Jim Tressel's staff at Ohio State.

Tucker is a Cleveland native, attended the University of Wisconsin, and has nine years of coaching experience in the state of Ohio and two in the state of Michigan. Several SEC teams have been making inroads into the Ohio region recently (Kentucky recruiting coordinator Vince Marrow in particular), and Tucker gives the Crimson Tide an established, credible recruiter with years of NFL experience in the region.

Alabama's 2015 recruiting class already looks like one for the ages...but if there's one thing we know about Nick Saban, it's that he's never willing to settle. With Lupoi and Tucker on board, the expectations for 2016 will be even higher.