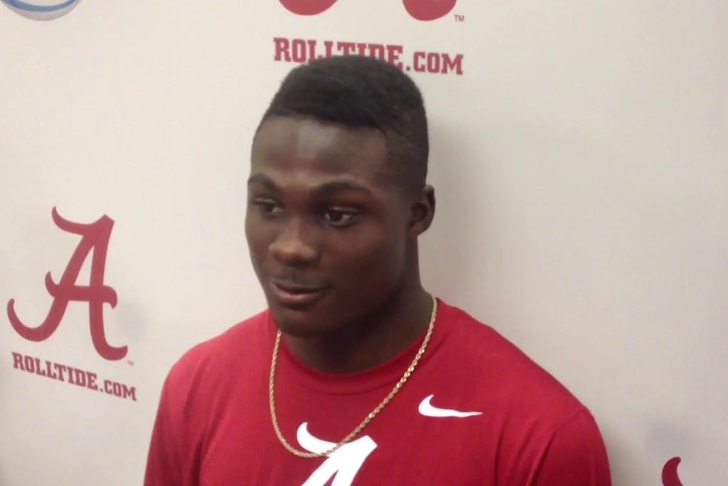 Four-star Tallahassee, Florida safety Ronnie Harrison is enjoying life as an early enrollee with the Alabama Crimson Tide, even gaining 12 pounds (from 206 to 218 pounds) while staying productive and wrapping his mind around life on campus.

“It’s been great,” Harrison said, via Charlie Potter of 247Sports. “Just a lot of fun, trying to get acclimated to the college life and making classes and workouts, really just time management. … You have a lot of things to do, class, tutoring, workouts, you have meetings. That’s been the biggest thing.”

Ranked as the #12 safety prospect in the Class of 2015 by 247Sports, the Tide are banking on Harrison becoming a major contributor within the next couple of seasons. With the depth chart at safety pretty light at the top for the Tide, he very well could see significant playing time as early as 2015.

“I think I have a good opportunity to start playing next year,” Harrison said. “I just have to learn the playbook and come in and work hard every day.”

Harrison doesn't lack for confidence either, as he's well aware of the strengths that brought him to Tuscaloosa.

“My biggest strength is probably just my awareness and my ability to play the ball in the air,” he said. “And my weaknesses? I don’t really like to think I have weaknesses, but probably just, I don’t know, probably just talking to my DBs, in terms of leadership and making sure everybody’s on the same page.”

His confidence isn't just limited to himself, however. He also has plenty of faith in the other blue-chip talents that made up the #1 recruiting class in the nation for 2015.

“It’s nothing new to Alabama,” Harrison said. “But we’re the No. 1 class, we’re bringing a lot to the table. We’ve got the No. 1 quarterback, one of the top running backs, we really put it together this year.”