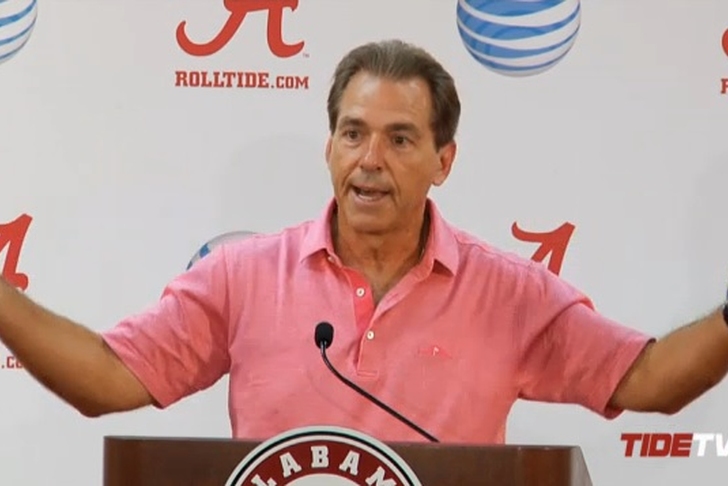 Nick Saban's Monday press conference mainly stressed the importance of preparation. Saturday's win over Colorado State was never in question, but the Crimson Tide were far from their best.

Saban began by talking about how vital it was to get the team on the same page preparation-wise. He discussed the importance not making mental errors, getting fundamental technique down and bringing that to the game, and was remarkably calm as he conceded that some of the responsibility for a lack of preparation fell to the coaching staff.

"There were a lot of good things we did in the game, but we also shot ourselves in the foot quite a bit with mental mistakes and technique errors. Those are things that are correctable, that need to be corrected so we can play with more consistency in the games." Saban said.

The first question from the media summed up the major concern about Alabama's play so far: "Is team chemistry also a work in progress?"

"I think team chemistry comes from everybody buying in to the principles and values of the organization," Saban responded. "There's work to do."

When asked how he evaluated the secondary in Saturday's game, Saban was honest, but relaxed.

"We need to play better... [most of the big plays] were on some kind of mental error." Saban conceded that not having Deion Belue played a part in the secondary's troubles, and Saban confirmed that Belue would return to full practice on Monday afternoon.

On the run game:

"It's the same things I've been talking about - mental errors...breakdowns in protection. We had a few missed assignments, but more than that we had a lack of technique."

On whether Alabama would line up defensively against Ole Miss the same way they lined up against Texas A&M:

"It's a completely different game than trying to defend Texas A&M...there's not even an ounce of similarity."

Saban also fielded a light-hearted question about a brief talk he had with PGA golfer Zach Johnson, who was on campus talking to Alabama's golf team.

"Were you working on your short game?" the reporter asked.

"I'm not working on any game except the Ole Miss game...not that my short game doesn't it, but I don't want to worry about that until March."