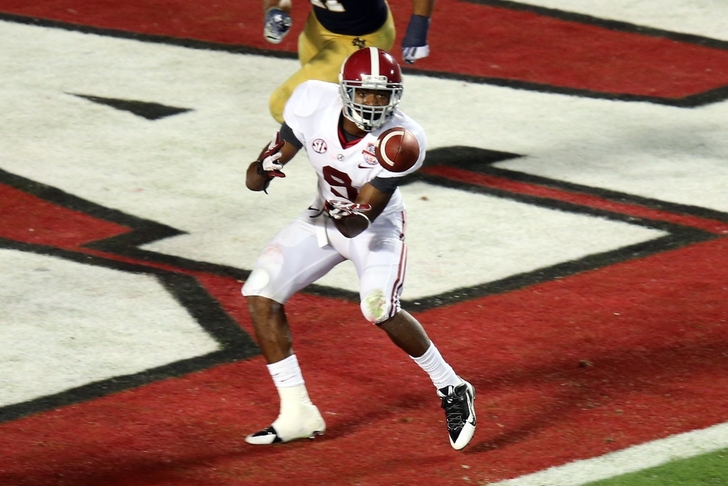 The Alabama Crimson Tide got off to a cagey start against West Virginia, leading by just three at the half.

Alabama's offense took over to start the third quarter, but a slew of penalties on both the WVU defense and Alabama offense kept things stagnant. Alabama QB Blake Sims managed to drive up to the Mountaineers 36, but the drive stalled - Nick Saban decided to let Sims go for it on 4th and 6, but his pass to Amari Cooper fell incomplete and the defense took over.

West Virginia quarterback Clint Trickett had looked solid in the first half, and he continued that on his first drive of the second half. Once again, though, his receivers let him down - a pass on third and long bounced off the hands of its intended target, and WVU was forced into a long field goal that never had a prayer.

Alabama took over at their own 30-yard-line, and the next drive was all about sophomore RB Derrick Henry.

Two punishing first-down runs (for 12 and 13 yards) pushed the Tide deep into WVU territory, and Henry earned a designed run play from the 19. After breaking a tackle, he was able to build up a head of steam...and once the 238-pound sophomore got going, there was no stopping him. With just under 8 minutes left in the third quarter, Alabama pushed their lead to 27-17.

Undaunted, the Mountaineers once again drove deep into Alabama territory. Trickett strung together four straight completions, taking WVU to the Alabama 25, but once again they had to settle for a field goal.

Alabama should have easily pushed the lead to 34-20 - Christion Jones was all by himself with a clear path to the end zone, but he let Sims' deep pass drop right off his hands. Alabama ended up settling for a field goal, and another chance to pull away fell by the wayside.

An unpleasant trend for the Tide continued in the second half - the Mountaineers made most of their long gains in the first half by targeting Alabama CB Bradley Sylve, and Sylve continued to give up big plays. West Virginia opened the fourth quarter by nailing a field goal to draw within seven, and things got worse soon after when Blake Sims was intercepted while trying a deep ball downfield.

The Mountaineers were unable to capitalize, though - after a three-and-out, Alabama got the ball back with 12:23 remaining in the fourth, and made it far enough into enemy territory for Adam Griffith to drill his fourth field goal of the day. At 33-23, Alabama had the lead...but not the lead they would have wanted.

Finally, late in the fourth quarter, Alabama's defense found their groove, and Clint Trickett as unable to make any more dents in the scoreline. The game wound down from there, and Alabama ended up with a less-than-stellar victory, 33-23.

Player of the Game: Amari Cooper

Cooper set a personal record with 12 catches, and also racked up 130 receiving yards on the day. Blake Sims started well, and TJ Yeldon and Derrick Henry both did an excellent job on the ground, but it was the consistent threat offered by Cooper that really made the difference for the Crimson Tide. If Cooper plays like this every week, he'll be a major name in the Heisman conversation.