Alabama Football News: Crimson Tide Lead WVU 20-17 At The Half 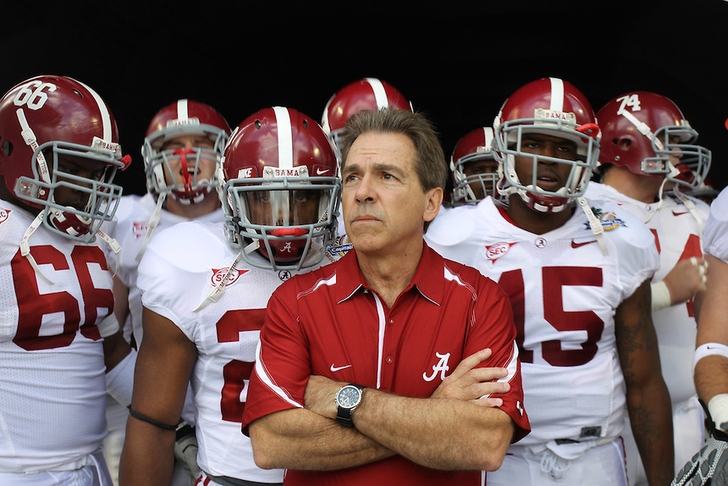 The Alabama Crimson Tide started their season opener against West Virginia with a point to prove.

Last year's Sugar Bowl loss is still fresh in the minds of Alabama fans and players, and Nick Saban's team felt obligated to set the tone early in 2014.

Blake Sims took the field under center for Alabama, and his first play from scrimmage was a 25-yard pass to WR Amari Cooper. Cooper, who struggled with injuries all of last year, was targeted with Sims' first two passes of the game, and it's clear that Lane Kiffin will call on him frequently this season.

The Tide pushed forward, but a WVU stop forced kicker Adam Griffith to try a 47-yard field goal...which he converted with ease.

WVU's next drive was stymied early, with LB Xzavier Dickson bursting into the backfield for a sack on third down.

Alabama started their next drive deep in their own end zone, but what they saw from Blake Sims and their running backs had to inspire confidence.

Sims kept his cool even while playing out of his own end zone, and both TJ Yeldon and Derrick Henry gashed the WVU defense for solid gains. After chipping away for over six minutes of game time, Sims connected with Christion Jones to bring the Tide into the red zone, and on the next play, Yeldon blazed through the defense for Alabama's first touchdown of the 2014 season.

To their credit, the Mountaineers weren't fazed.

In just over two minutes at the beginning of the second quarter, Clint Trickett engineered a 9-play, 75-yard scoring drive that culminated in a 19-yard strike to Kevin White. While both teams looked like they had found a rhythm, the next scoring play didn't come for another ten minutes.

Cagey possessions from both teams ended up going nowhere, and Alabama got the ball back with eight minutes on the clock. Sims got both Amari Cooper and DeAndrew White involved, and it paid immediate dividends - White made an excellent move to break away for a 38-yard gain, and TJ Yeldon punched it in for his second touchdown just two plays later. It was 17-10 Alabama with just under two minutes left...but West Virginia had an immediate response.

Mario Alford caught the ensuing kickoff, broke a tackle, and raced away for a 100-yard return for a touchdown.

Sims put together a sharp, quick drive to get the Tide into field goal range, and as time expired in the first half, Adam Griffith buried a 41-yarder to give Alabama a 20-17 lead. Nick Saban's interview before heading to the locker room was blunt - calling players 'soft', he clearly felt they could - and should - be winning by a lot more than a field goal.