Alabama Football News: Crimson Tide Lead FAU 31-0 At The Half 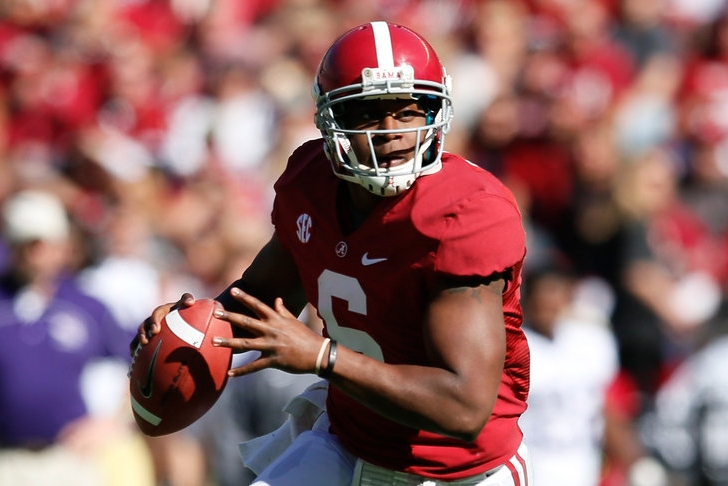 The Florida Atlantic Owls took a trip to Tuscaloosa for Alabama's home opener, and it didn't take long for the Crimson Tide to show the fans the difference in class between the two programs.

Alabama started out on offense, and almost immediately found themselves deep in enemy territory after Amari Cooper broke off a long run on a designed end-around. The Crimson Tide carved the FAU defense open on each successive play, and it wasn't long before Blake Sims took off through a gap to make it 7-0. All in all, the first Alabama drive covered 74 yards in just seven plays, taking just over two minutes.

After FAU's first drive fizzled out quickly, the Tide took over at their own 26...and the Amari Cooper show continued. After a quick 8-yard connection to Cooper, QB Blake Sims found him again on a patented Lane Kiffin bubble screen...but Kiffin never had a player like Cooper at USC or Tennessee. Cooper danced around a tackle and accelerated into space, and just like that it was 14-0.

Florida Atlantic just couldn't get anything going on offense, and an uneven game quickly became one-way traffic. Jacob Coker saw playing time before the end of the first quarter, and the Tide lightened up on the passing game to keep things from reaching mercy-rule territory.

Coker continued to get reps with the first-team offense well into the second quarter, and while the Tide didn't seem to have the rhythm they had with Sims, Coker still found ways to move the chains. The Crimson Tide kicked a field goal on Coker's first drive, and apparently that wasn't enough for Lane Kiffin - he was overheard on the sideline making his feelings known.

"Whatever you do, don't make us kick another field goal on this drive - it's embarrassing."

Coker spared Kiffin's blushes by engineering a touchdown drive that put the Tide up 31-0 halfway through the second quarter. While he didn't look as sharp as Sims, he certainly showed promise.

Florida Atlantic finally strung together a solid drive, taking them all the way to the Alabama 34...but things stalled there thanks to a penalty and a massive sack by Ryan Anderson that took the Owls back 16 yards. The Crimson Tide got the ball back at their own 22 with under a minute left on the clock, but Lane Kiffin and Nick Saban didn't take their foot off the gas pedal. Coker took the Tide all the way down to the FAU red zone, but a mental mistake ended the first half with a sack.

The Tide led 31-0 at the end of the second quarter, and looked well in control.

Blake Sims looked poised and collected, but the first-half MVP award has to go to WR Amari Cooper. Cooper looked like a bona-fide Heisman contender as he broke out for big plays all over the field.