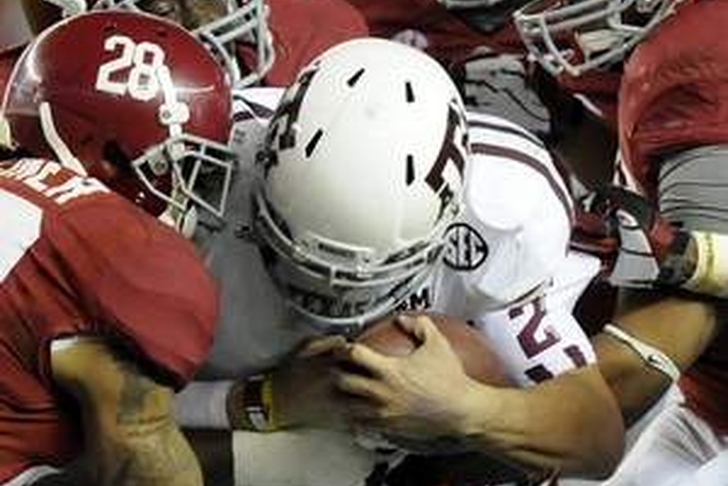 After a first half that saw Alabama score four unanswered touchdowns to turn a 14-0 deficit into a 28-14 lead, the Crimson Tide started the second half looking to keep their momentum going.

The offense stuttered, punting after a possession that didn't last longer than a minute. Unfortunately for the Aggies, the defense was still rolling. Johnny Manziel threw a pass that was tipped into the waiting arms of Vinnie Sunseri, who took off running. Manziel tried to run in to make the tackle himself, but Sunseri made Manzeil whiff with a gorgeous stutter step.

Sunseri went all 73 yards back, and ran it in himself for Alabama's fifth straight unanswered touchdown. With 13:27 left in the third quarter, Alabama went up 35-14.

LaQuvionte Gonzalez, A&M's kick returner, brought the ensuing kickoff back 40 yards, giving Manziel a shorter field to work with on the Aggies' next drive. Looking to take some pressure off of Manziel, the Aggies coaching staff decided to lean on the running game on the drive, but after Tra Carson and Ben Malena rushed their way to Alabama's 11, Manziel found Malcolme Kennedy for a touchdown to stop Alabama's run and bring the Aggies within two touchdowns.

As the game shifted from a QB battle to a ground war, TJ Yeldon and Kenyan Drake answered with an assertive performance on Alabama's next drive. Yeldon put the Tide into scoring position with several nice runs, and Drake punched the ball into the end zone to extend Alabama's lead to 42-21.

The quarter ended with two stunted drives, and as the clock wound down the score stayed at 42-21, Crimson Tide.