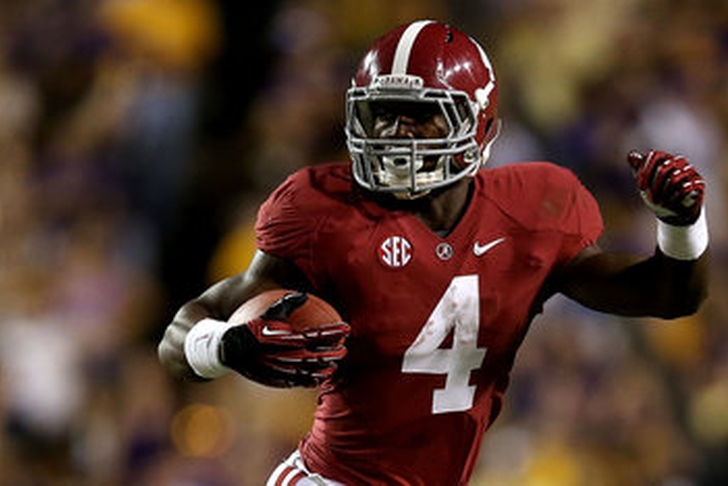 Alabama made their trip to College Station looking to avenge last year's home loss to the Aggies - their only defeat last season.

A&M got off to a blazing start, with two long completions from Johnny Manziel to Mike Evans getting the Aggies into the Red Zone two and a half minutes into the game. Manziel floated a perfect ball up for tight end Cameron Clear, and before Alabama had time to orient themselves the Aggies were up by a touchdown.

The Crimson Tide's opening drive took them nowhere, thanks to five-yard penalties in a row on second down. The Tide looked rattled, and after gaining three yards on second and third down, they handed the ball right back to Manziel.

Thanks to a short punt, the Aggies started near midfield, and on first down Manziel instantly recognized pressure from the left and sprinted around the right corner into space for a first down. On the very next play, Manzeil found Mike Evans for his third 30+ yard catch of the day, setting up a first and goal from the three. Two plays later, the Aggies were back in the end zone, up 14-0 just seven minutes into the game.

Alabama' second possession showed massive signs of improvement. After an imcompletion on their first play, the Crimson Tide moved the chains four straight times before AJ McCarron threw a beautiful pass to Kevin Norwood streaking towards the goal line. Norwood jumped and twisted towards the ball, making the catch while simultaneously stretching his body towards the end zone. The extension helped him land over the line, and with 6:05 left in the opening quarter Alabama had tightened the scoreline to 14-7.

The ensuing kickoff was a rolling chip shot that returner Brandon Williams couldn't quite handle - it bounced off his hands and out of bounds to pin the Aggies back at their own 2-yard-line.

Manziel wasn't fazed. He drove the Aggies all the way to the Alabama 35, but a 15-yard penalty stuck them back at midfield, and the Aggies were forced to punt.

The first quarter ended with a score of Texas A&M 14, Alabama 7