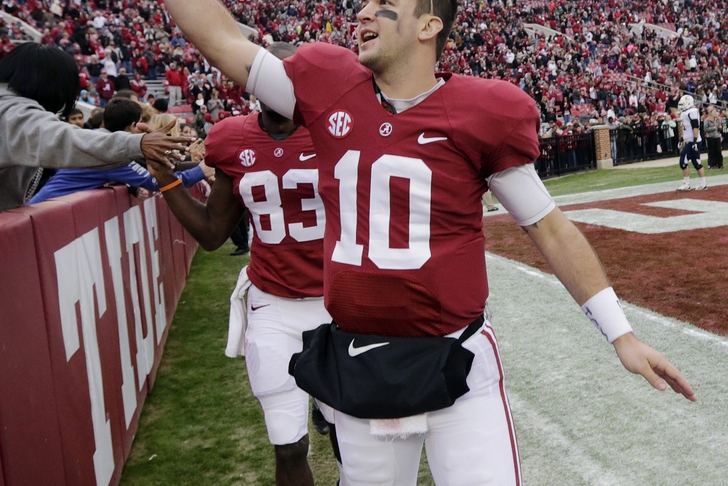 In an interesting bit of Alabama football news for you early risers this Friday morning, former Alabama quarterback AJ McCarron has made it clear that the level of success the Alabama Crimson Tide attained during his time there is the reason why the Tide's 2013 season felt so disappointing.

In an interview with Jim Rome on Thursday, the second-place finisher in the 2013 Heisman Trophy race made it perfectly clear that a mix of youth and past success was the reason why the Alabama Crimson Tide felt short of their championship goals this past season--

“In the end, success was our killer. Too much success and a lot of young guys coming in who didn’t know what it took to get back to that point to win. They thought we’d just show up and we’d win.”

The decorated former Alabama quarterback didn't hold back when pressed on the issue, stating that, "it’s definitely tough to lose, but it kind of shows when you don’t have everyone buy into one system, one belief, then sometimes a team is going struggle.”

This is an interesting about-face by the two-time BCS champion, who shouldered the majority of the blame after the Alabama Crimson Tide's 45-31 loss to the Oklahoma Sooners in the 2014 Allstate Sugar Bowl.

Want breaking Alabama football news? Chat Sports has it. Be sure to follow our Crimson Tide team page.