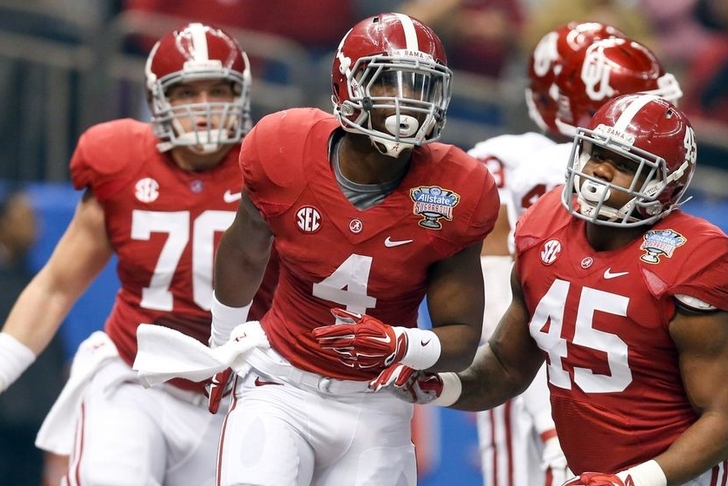 The Crimson Tide quickly asserted their dominance in the first half, leading 31-0 at the break, and things didn't change much at the start of the third quarter.

Florida Atlantic started the second half with the ball, but their opening drive was quickly snuffed out. Blake Sims stepped back in for the third quarter, and engineered a beautiful drive all the way into the red zone...but there, his first real mistake of the night cost the Tide. A miscommunication between Sims and RB T.J. Yeldon led to a fumble recovered by FAU, and the Owls took over deep in their own territory.

The Owls offense had looked overmatched and incapable all day, but something sparked to life - RB Jay Warren ran right over Alabama safety Landon Collins, and on the next play the Owls picked up another first down on a nice catch.

The Alabama defense, to their credit, bent but didn't break. A defensive stop in their own half forced FAU to try a fourth-down conversion, and the the pass fell incomplete.

Jacob Coker took over on offense, and looked to have settled down considerably after some early nerves. Some nice work by Amari Cooper and Kenyan Drake set up a 41-yard bomb to freshman WR ArDarius Stewart, and that in turn set up a Kenyan Drake touchdown run.

After trading possession in increasingly bad conditions, Jacob Coker took the Tide to the FAU 11, but couldn't pick up the first down or find the end zone. Adam Griffith nailed his second field goal of the day, though, and the Tide extended their lead to 41-0 with about 12 minutes left in the game.

The weather continued to get worse, and with around nine minutes left, the referees decided to call a lightning delay after several strikes in the immediate vicinity.

Conditions didn't look like improving any time soon, so the referees decided to call the game at 41-0.

Tying a school record for catches in a game, Cooper gave the FAU defense fits almost every time he touched the ball. On an offense loaded with weapons, Cooper stood out as by far the most dangerous, and his 13 catches for 189 yards and a touchdown (with another run for 20 yards) helps his case as a legitimate Heisman contender.