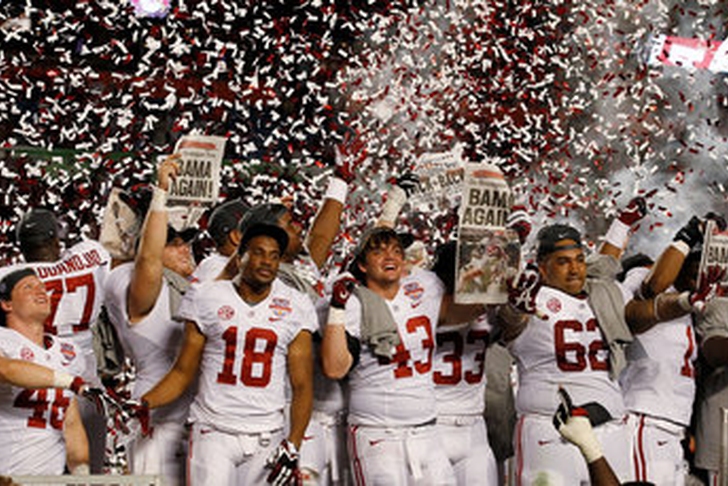 What is your final prediction for the Tide this season? What's their record and bowl result? Please explain a few of the key games.

14-0, National Championship. I’ve tried really hard to find a team who could unseat Alabama this season because it seems so improbable that they could win a third consecutive National Championship, and fourth in five years. I just can’t find a team that I think can do it. It’s even tougher to pick against Alabama this season when they got such a break with scheduling. They avoid South Carolina, Georgia, and Florida from the SEC East this season, instead playing Tennessee and Kentucky in their crossover games. They also have bye weeks before their two toughest games of the season. After opening with Virginia Tech in Atlanta, they get a bye week before traveling to College Station to take on Texas A&M. They also get a bye week before hosting LSU in November.

If they can navigate their way through Texas A&M in September, it’s hard to see Alabama not going undefeated. While the Aggies will be a tough test, we all know Nick Saban’s track record against opponents after losing the previous game against them. And while LSU always provides a stern challenge, the Tigers lost a lot of talent, specifically on defense, and seem to be in a bit of a rebuilding year.

If Alabama gets through the regular season unscathed, then they will more than likely face either Georgia or South Carolina in the SEC Championship Game. Both of those teams have a lot more question marks than Alabama. South Carolina has a nasty defense, but it is still to be seen whether or not the offense will hold up their end of the bargain. And Georgia, much like LSU, lost a lot on defense as they return only three starters. Outside of the SEC, I really don’t see a team that can dethrone the Crimson Tide. I think, at the end of the season, Alabama will once again be standing alone at the mountaintop with another crystal football added to their ever growing trophy case.

I don’t like prognostications, particularly before the harrowing Fall Camp begins. So much can change the complexion of the season before it even starts (suspensions and especially injuries). The season is even more perilous. Once the helmets are on, and the kids are flying around, anything can happen in one play. Ask Marcus Lattimore. Alabama had exceptional fortune in its lack of major injuries to key starters in 2011 and 2012. But, just look to 2010 for the inverse of that: Ingram and Richardson hobbling; Barron's torn chest muscles; Dareus' suspension and nagging injuries; McElroy's injury in the Iron Bowl. The records reflect those injuries (and lack thereof), to a certain extent.

Then, there's the issue of the schedule: While it is the easiest path in several years, there remain tough games on the road against Texas A&M and their returning Heisman winner, against a scrappy Ole Miss team, against an Auburn team with much improved talent and coaching. There's the season opener against a very sound Virginia Tech. There is a rivalry game against the talent-infused Vols. There are the Razorbacks, who will be a much tougher out than the Petrino teams of the past few seasons. Oh, and then there’s that little matter of overcoming a home date with our mirror-image mortal foe, LSU: a team of equal talent, equal motivation, and capable of beating anyone in the nation.

There are too many variables to comfortably make predictions. But, given the uncertainties along both lines, the unsettled nature of the secondary and the weekly grind of the SEC, I don’t see an undefeated season. Then again, I don’t think we will see mental errors and injuries derail an exceptional team as in 2010. I would think 10 or 11 regular season wins would be a very good season, with a late season showdown against LSU deciding the SEC West. The SEC Championship Game winner will then move on to, and defeat Ohio State, in the BCS Championship game. As a fan and alum, I hope it’s us.