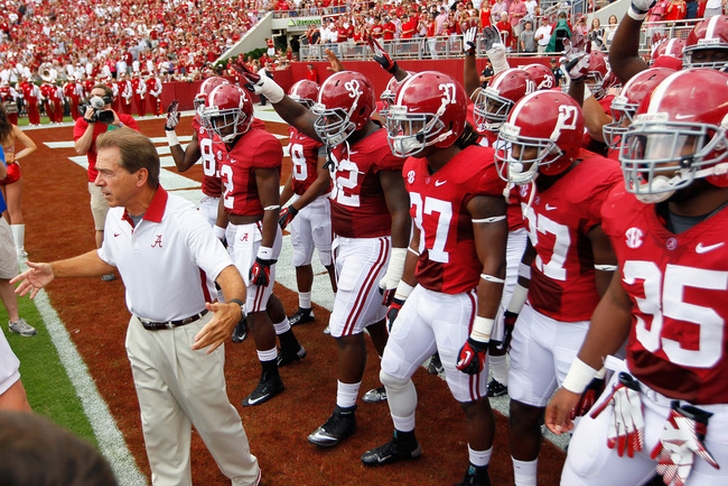 There are several positions to watch over the fall camp (and, more importantly, over the first few games of the season), offensive line being the most obvious question mark. But there is a more intriguing story that I think will be recurrent throughout the season. With the loss of all-everything cornerback Dee Milliner, and with few "true" corners on the two-deep, the secondary is in flux on the outside.

For now, you can pencil in John Fulton and Deion Belue in as starters. However, don't overlook Geno Smith to win one of these spots, particularly if John Fulton's turf toe lingers or Deion Belue has some of the mind-blowing gaffes of last year. (Likewise, don't forget that Smith actually earned the start in three-out-of-four over Belue to end the 2012 season.) No matter who gets the eventual nod in the media guide, it's tough to peg two true starters here, and it may ultimately be irrelevant anyway given Saban's reliance on extra backs out of the Star (nickel) and Money (Dime) packages.

Alabama has to replace three starters on their offensive line, and only one spot is solidified heading into fall camp. Ryan Kelly will be the starting center, replacing Barrett Jones, but the battles at left guard and right tackle are far from over. Arie Kouandjio is the favorite to win the starting job at left guard, but senior Kellen Williams and freshman Alphonse Taylor will push for the job during camp. Junior Austin Shepherd is expected to be the starter at right tackle, but junior college transfer Leon Brown is sure to make a run for the job during camp as well.

Sticking with the offensive side of the ball, it’s going to be interesting to see who gets the nod at wide receiver. Alabama didn’t lose a single scholarship player at the position from last season, and they have the likes of DeAndrew White, Kenny Bell, and Chris Black coming off injury as well as a couple of highly touted freshmen receivers who will push for playing time. Figuring out a way to get all these guys on the field will be a challenge for Nick Saban and offensive coordinator Doug Nussmeier, but it’s certainly a good problem to have. I’m also looking forward to seeing how the carries get divvied up in the backfield. T.J. Yeldon is the unquestioned No. 1 on the depth chart, but behind him you have the likes of sophomore Kenyan Drake, junior Jalston Fowler, and then several highly rated freshmen in Derrick Henry, Alvin Kamara, Altee Tenpenny, and Tyren Jones who will all be fighting for carries.

On defense, figuring out who starts at safety alongside junior Ha’Sean Clinton-Dix will be paramount. Junior Vinnie Sunseri has the experience and played a lot last season, but he was wildly inconsistent in coverage last season. The door will be open for sophomore Landon Collins, a former five-star recruit out of Louisiana, to grab the starting job. I expect the loser of this battle to man the ‘star’ position in the secondary when Alabama is in the nickel set.

Who is your young player poised for a breakout year to keep an eye on?

Everyone knows to keep an eye out for Sophomores T.J. Yeldon and the Amari Cooper, freshman all-Americans who are among the most dangerous players in college football. However, I'd like to go with presumptive tight end starter O.J. Howard. Howard has the perfect skills set to be lethal at this level: Size, speed, hands. If the offense integrates him properly then he will be a much-needed red-zone weapon, a vertical threat in play action, and will give A.J. McCarron a frightening 3rd or 4th option underneath.

I’ll give you one on both sides of the ball. On offense, sophomore running back Kenyan Drake showed flashes of his potential last season in mop-up duty. Most, if not all of Drake’s carries came last season when the game was already decided and he was running behind the second team offensive line against stacked boxes. He still managed 6.7 yards per carry, which was higher than Eddie Lacy and T.J. Yeldon. Drake has the potential to be a real home run hitter for the Crimson Tide’s offense with his impressive breakaway speed, and he has inside track as the No. 2 back on the depth chart behind Yeldon.

On defense, I once again look to sophomore Landon Collins who was a special teams demon in 2012. I think Collins will supplant Vinnie Sunseri as the starting safety alongside Clinton-Dix, and I expect him to have a breakout season on Alabama’s defense. The quickest way to playing time on Nick Saban coached teams is working your butt off and making noise on special teams, which is exactly what he did as a true freshman in 2012. Collins will have a role on the Tide’s 2013 defense, and I think he’ll be a household name at season’s end.