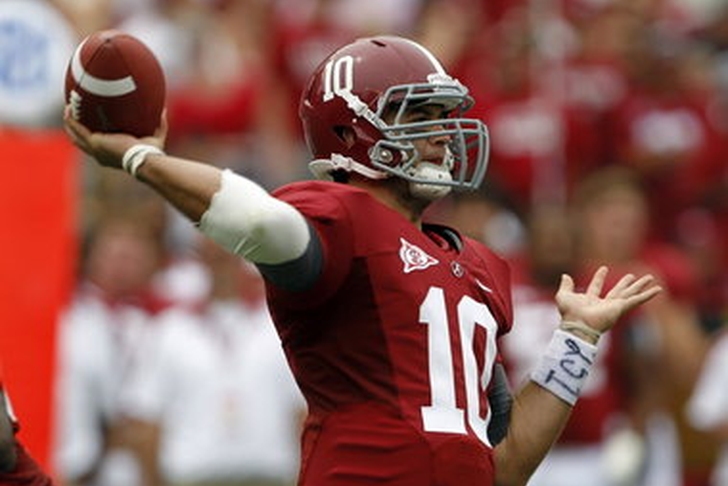 Given A.J. McCarron's stellar junior season, what will it take for him to win the Heisman this year?

Seriously, despite AJ's stellar numbers (30-3 TD-INT ratio, 3000-plus yards passing, two BCS titles, 23-2 record in 2012-2013), he just will never be that guy who gets to throw the ball 30-35 times a game consistently in this offense. And that says nothing about whether he is talented enough to do so, and do so well. Clearly he is. Rather, the issue goes to the identity of Nick Saban and the culture of Alabama football... team first.

The hallmark of a Saban team is balance, and that will not change irrespective of the coordinators or the players. Last season, under new offensive coordinator Doug Nussmeier, Alabama rushed for 228 yards per game, passed for 218, and rang up 39.7 points per game. But this isn't aberrant. Under Colorado State head coach and former offensive coordinator Jim McElwain, Alabama's 2011 offensive numbers were 214 rushing YPG and 215 passing YPG; good for 34.8 PPG.

For all of Alabama's reputation as a run-first offense, the proper identity is actually toughness: it is in winning the close physical battles, it is in grinding it out with the LSUs and Floridas of the world. Simply put, for McCarron to get the numbers required to be a Heisman winner, Alabama would need to lose that identity and put the ball in the air to the detriment of a balanced offense, or become a one-man show (a la Troy Smith or Tim Tebow) to the detriment of a team-first concept. Neither will happen. While Heismans are nice; division, conference and national titles are better. Balance. Team-first. As the Bryant-Denny Stadium video intro will tell you, "This is Alabama football."

If being the most efficient passer in college football, completing 67 percent of your passes, and throwing 30 touchdowns to just 3 interceptions, while piloting the best team in college football wasn’t enough to even garner him serious consideration last season, I’m not sure there is anything he can do to capture Alabama’s second Heisman Trophy. The last three Heisman winners -- Cam Newton, Robert Griffin III, and Johnny Manziel, were all dual-threat quarterbacks who put up some eye popping rushing numbers to go with superb passing statistics.

With the likes of Manziel from Texas A&M, Braxton Miller of Ohio State, and Marcus Mariota of Oregon back this season, it’s going to be tough for McCarron to do enough damage as a passer to offset his lack of prowess as a runner. So, unless McCarron somehow developed 4.4 speed in the offseason, and Nick Saban decided to make the switch to a spread-option offense, don’t look for McCarron to get the praise he deserves from the pundits to make a serious run at the Heisman.

Which units pose the biggest questions marks for the Tide this season?

If SEC games are won and lost in the trenches (they are), then Alabama fans have every reason to be concerned with the loss of big uglies on both sides of the ball. Oddly, though, I have much more faith in the offensive line rebounding, despite losing Chance Warmack, D.J. Fluker and Barrett Jones. Saban has not had the success along the defensive line at Alabama that he had at LSU (then again, Baton Rouge always gets the pick of the superior D-line talent along the coast). Inconsistency has plagued many guys, and there has yet to be a unit that truly terrifies you across the board. If you were to ask me to describe Alabama defensive lines since 2007, I would say this: "Usually competent, with one great guy, a few role players and suspect depth."

The main difference in 2013 is that the depth is there, but this is (as usual) not a complete unit: there are several good end rushers returning (Xzavier Dickson, Jeoffrey Pagan, LaMichael Fanning), a very good do-everything guy in Ed Stinson, several excellent incoming prospects (Dee Liner, Darius Paige and A’Shawn Robinson), but no proven nose tackle. Brandon Ivory is slated to fill this role, but there is zero proven depth behind him, and whether he can shoulder the load effectively as a starter remains to be seen.

Both lines have been retooled, which leaves plenty of question marks because in the SEC - games are normally won in the trenches. The offensive line has seemingly made a smooth transition despite the loss of two first round draft picks and the versatile and irreplaceable Barrett Jones. The defensive line returns one starter in senior Ed Stinson at defensive end, but will have new starters at the other end and at the nose. Junior Jeoffrey Pagan was firmly a part of the defensive line rotation last season, and his progression should make his transition to starter relatively smooth. At nose tackle, replacing Jesse Williams won’t be easy, but we generally didn’t see a drop off last season when junior Brandon Ivory was in the game. The real question is finding depth behind Ivory. Sophomore Darren Lake has received rave reviews, and if he can perform at a high level as Ivory’s backup, then that will go a long way in solidifying the Tide’s defensive front.

The secondary was the biggest question mark last season, and it will continue to be this season after the Crimson Tide lost All-American and first round draft pick Dee Milliner, and a three-year starter at safety in Robert Lester. Senior Deion Belue is the top cornerback, and while he was inconsistent at times last season, Belue seems to have taken a gigantic step forward by the way he looked during the spring. I think Alabama’s secondary has the potential to be better this season than they were last with the improvement of Belue and the emergence of Clinton-Dix and Landon Collins at safety. The unit was much maligned last season, but they still finished tops in the SEC and 7th in the country in passing yards per game allowed.