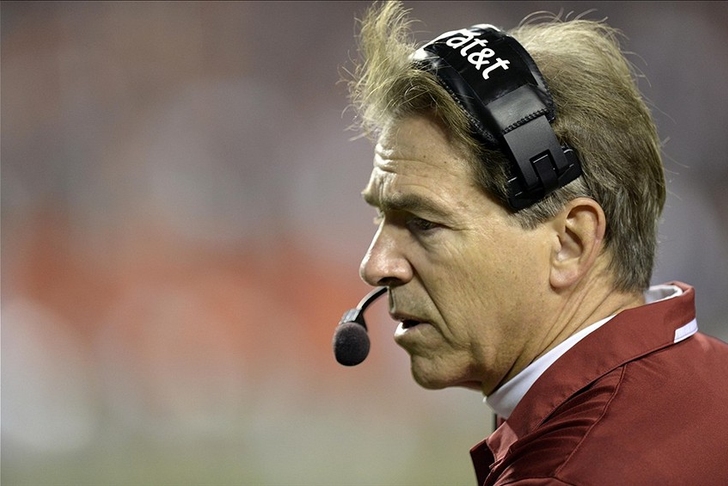 The Saban-to-Texas rumors just won't go away. We're still unconvinced - from everything we've heard, there's a very good chance Saban sticks around - but we'd be shocked if the Alabama athletic department wasn't making contingency plans for a worst-case scenario. If (and we can't stress enough that's still an IF) Saban leaves Tuscaloosa, here are the top candidates to replace him.

Earlier this season, McElwain showed Alabama fans just what he's capable of - his undersized, underpowered Rams made the Crimson Tide fight for every inch. The former Alabama offensive coordinator may not be ready to make the leap from the Mountain Division to the SEC just yet, but keep an eye on McElwain anyway - he has fantastic potential as a head coach.

Fitzgerald is one of the most widely-respected coaches in the country, and even though he's turned down big opportunities in the past, there's a lot of chatter that he has his eye on the next challenge. Competing in the Big 10 with heavy academic restrictions and the inability to match Ohio State's recruiting and spending power is getting old for Fitzgerald, and it sounds like he'd jump at the chance to move south if the Alabama job became available.

Fisher's Seminoles are preparing for the BCS Title game next month, but there are rumors circulating that he'd listen if the right opportunity presented itself. Florida State waltzed through the ACC virtually unchallenged, and if Fisher wants to test his skills at the highest level, he'll have to move to the SEC to make that happen. If Alabama came calling, we expect he'd have a very difficult decision to make.

Strong's Sugar Bowl victory in 2012 vaulted him to the top of many lists, and he'll get a serious look if Saban leaves this week or years down the line. Strong is a proven winner at every level, and he's been pegged for a step up for some time now. Look for Strong to get a serious look if our #1 candidate doesn't pan out.

Smart has been a leading candidate for several head coaching jobs already, and at 37 years old, he already commands incredible respect in coaching circles. The highest-paid DC in college football, Smart won the 2012 AFCA FBS Assistant Coach of the Year award, and is the consensus choice to take over if Saban leaves.

Dantonio is highly unlikely to move before the Rose Bowl, but he could be very much in play for the Alabama job. The 2013 Big 10 Coach of the Year is an excellent recruiter who's ready for a step up, and there are whispers that Alabama has been monitoring Dantonio's status if Saban bolts for Texas.

Exclusive: John Harbaugh is the #2 Choice for Texas Football Coach