#8 Alabama vs. Tennessee: 3 Things We Learned From Each Team 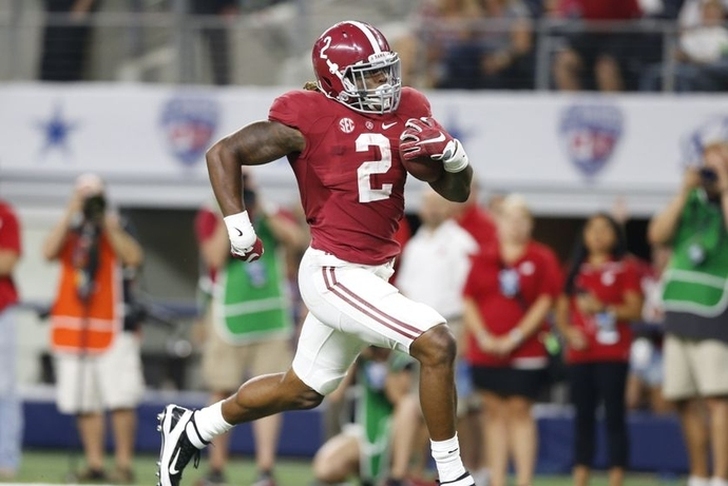 The Tennessee Volunteers put up one heck of a fight, but a late Derrick Henry 14-yard TD run pushed the #8 Alabama Crimson Tide ahead to stay with just over two minutes to go in a 19-14 win. Here's 3 things we learned from both teams.

Derrick Henry added yet another notch to his Heisman candidacy belt. Henry gouged the Volunteers run defense for 143 yards and two touchdowns on 28 carries.

ArDarius Stewart and Calvin Ridley don't have the same game-breaking talent as Amari Cooper, but they've both emerged as top-tier targets for Jake Coker. They each picked up 88 receiving yards on 12 combined catches.

Alabama's run defense had one of its least efficient days of the year, but that's mainly because the Vols loaded up on the run all day. In fact, it wasn't a bad day at all. Tennesssee rushed for 132 yards, but they did only pick up 3.4 yards per carry.

Tennessee's defense has little to hang its head about in this game. Derrick Henry's "Beast Mode" final drive aside, the Vols D did everything in its power to deliver this one to the road side.

Josh Dobbs was relegated to game manager mode in the passing game, going 13-of-22 for 171 yards and a costly interception. Alabama also did a fantastic job smothering him in the running game. Dobbs' long run was 17 yards and, with sacks taken into account, he gained just 19 yards on 16 carries.

Alabama has had Tennessee's number for nearly a decade. Tennessee's last win against the Tide came back on October 21st, 2006. They are 0-9 against Bama since then.