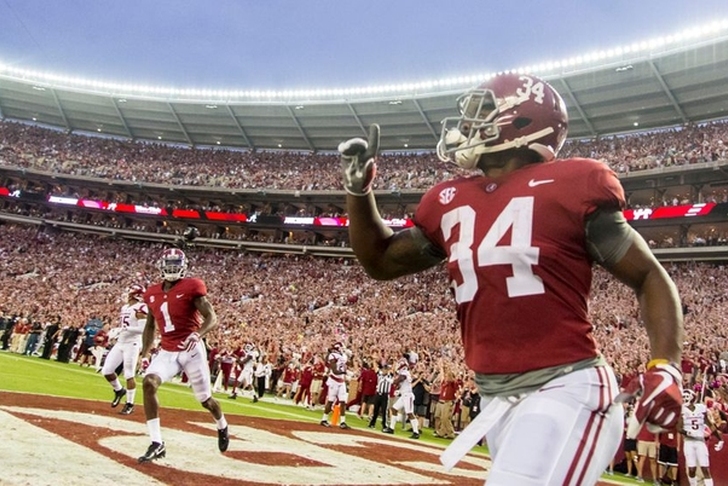 The Alabama Crimson Tide continued their dominance on Saturday night, cruising to an easy 41-9 win over Arkansas. Though it was a good team win, a number of players were the difference in putting the Tide over the top. Here are the top five standout players.

Damien Harris
Harris gets the game ball because he was the guy who really broke the game open. He scored a 75-yard touchdown on the first play from scrimmage in the game and later added a short touchdown run in which he broke four tackles.

.@DHx34 breaks a number of tackles on his 2nd TD run of the game! #RollTide #ARKvsBAMA pic.twitter.com/8yNRgFeYzG

Even though Alabama rotated pretty much all of their running backs tonight, Harris finished with 125 yards and those two touchdowns on just nine carries.

Rashaan Evans
Now healthy, Evans has been a wrecking ball for the Tide. You could put any number of defensive players on this list, but Evans gets the first mention because of how much the senior means to this team - and how much more dynamic he makes their defense when he's playing at the top of his game. He finished this game with six tackles and two sacks.

Check out the College Football by Chat Sports podcast!

Jalen Hurts
Here's your obligatory Jalen Hurts portion of the article. The sophomore quarterback just makes everything look so easy and continues to show improvement in the downfield passing game, which has turned their offense into a well-oiled machine.

Hurts did throw his first interception of the season in this one, but completed 12/19 passes for 155 yards and two scores to go along with 41 yards on the ground and another score. He is showing why some are calling for him to be a Heisman candidate.

The Tide continue to roll thanks to a 20-yard TD pass form Hurts to Ruggs! #RollTide #ARKvsBAMA pic.twitter.com/kuUe5vADzR

Mack Wilson
I'll be honest, Wilson made this list because of this diving interception:

However, Wilson did much more than that during his time on the field, delivering several of the hard hits we've come to expect from him. He finished the game with two tackles and that pick - the only turnover Alabama forced.

Najee Harris
You could make the argument that a number of players are worthy of this spot, but I'm giving it to Harris because of his performance late in the game. The No. 1 overall recruit in the country went to Alabama despite knowing that he would be the third or fourth running back but is playing hard and well when he gets on the field. Harris ran for 33 yards and this touchdown on five carries.