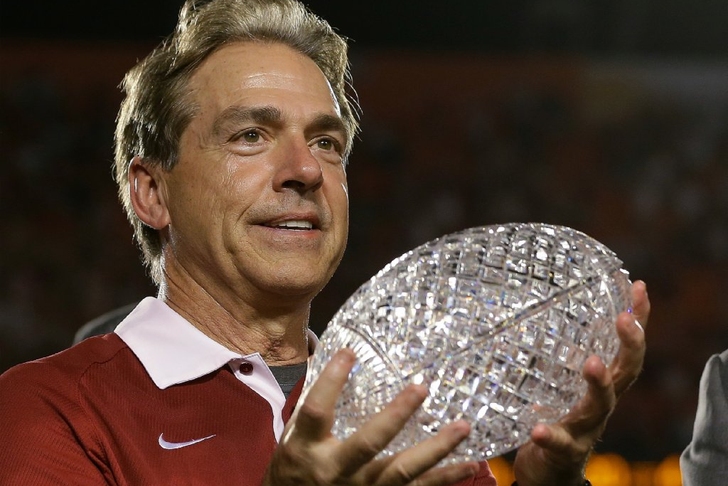 There will always be pretenders to the throne, but there's no head coach in college football with the pure track record of dominance that Alabama football's Nick Saban has. With that in mind, here's 5 Reasons Why Nick Saban Is Still The Best NCAA Football Coach.

Taking Saban’s NCAA violation-sullied first year out of the equation, Saban is a staggering 84-11 over his past seven seasons in Tuscaloosa. Saban's won 88.4% of his games since 2008 while playing in the dog-eat-dog SEC. Simply unreal.

2. 3 National Championships In The Past Six Seasons

Those three titles came in a four season span from 2009-12, giving college football the closest thing it's had to a pure dynasty in decades.

Other coaches and programs claim to be at the top of the heap when it comes to securing blue-chip prep talent. Saban doesn't talk about it, but the year-by-year on-field results from his hauls on the trail have built the Tide into the powerhouse they are today.

Taking on the Alabama football head coaching job means you're in one of the most scrutinized seats in all of sports, not just collegiate. Saban has walked through the fire relatively unscathed, letting the program's results on the football field stand as the real answer to his critics' gripes.

A tumultuous spring in 2015 is the first real crack in the disciplinary armor for Saban during his near-decade with the program. With other coaches, an offseason full of dismissals and upheaval would bring chaos along with it. That won't be the case with Nick Saban. It never has been.