4 Things We Know About Alabama Through 6 Games 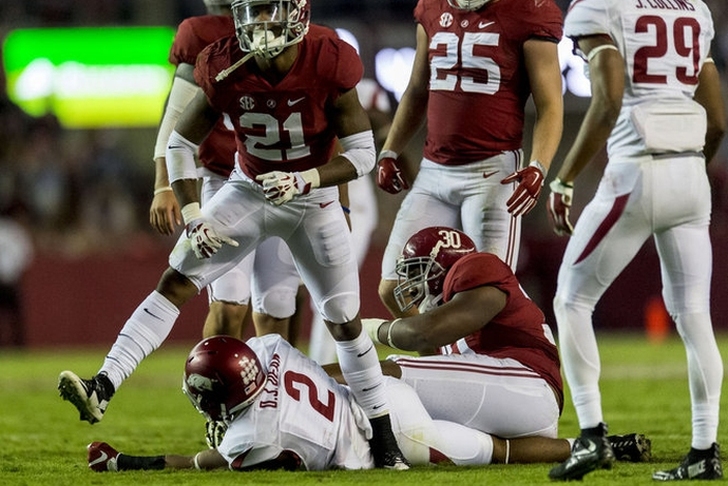 The Alabama Crimson Tide are still right in the mix of the College Football Playoff race despite losing to Ole Miss earlier this season after beating Georgia and Arkansas. Now ranked No. 10 in the country, the Tide are poised to shoot back to the top of the polls. Here are four things we've learned about Alabama so far this season:

Henry only rushed for 95 yards in Bama's 27-14 win over Arkansas on Saturday, but he did score a touchdown for the sixth straight time to start the season. Even when Henry rushes for under 100 yards, he's the most important part of the Crimson Tide attack both as a decoy and as a producer.

They have a quarterback!!

Finally! Coker threw for 262 yards and two touchdowns against Arkansas' vaunted defense, marking the latest in a line of impressive performances. He won't have to carry the offense with Derrick Henry and Kenyan Drake in the backfield, but his arm talent is good enough to keep opposing defenses honest. As long as he can consistently make good decisions and take care of the ball, Alabama's offense will be extremely tough to stop.

One of the big questions coming into the season was who would become Alabama's go-to wideout in a group of new receiveres, and it's been true freshman Calvin Ridley that has stepped up. He's the team leader in receptions (31), yards (385), and touchdowns (three), most of which have come in the past two games (14 catches, 260 yards, two TDs).

The Tide's defensive line is big, deep and extremely talented with returning starters A’Shawn Robinson, Jarran Reed and Jonathan Allen leading the charge. In the linebacking corps, Reggie Ragland turned down a sure ticket to the NFL to come back and lead a unit that also features one of the biggest hitters Tuscaloosa has ever seen, top recruit Reuben Foster. They've limited Nick Chubb and Alex Collins in consecutive weeks, showing there's no back they can't stop.