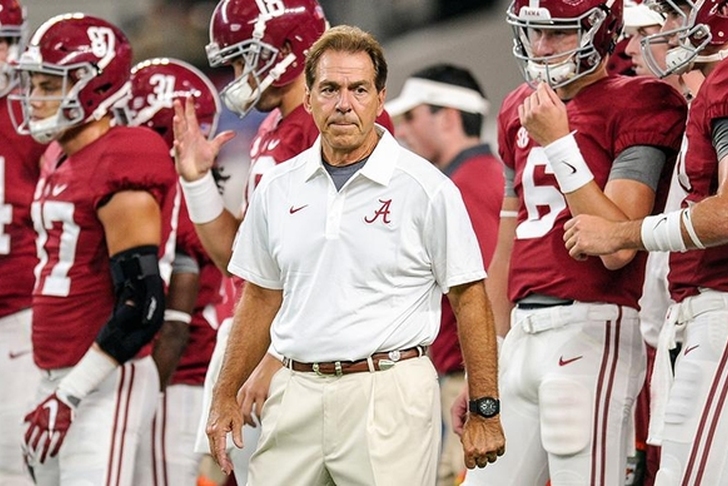 The Alabama Crimson Tide's crushing home loss to the now #3 Ole Miss Rebels has caused many football experts to jump off the Bama ship -- even though there has been and will be a one-loss SEC team in the playoff/championship picture from here until college football stops existing. Lane Kiffin resignation rumors aside (you know, the ones that are BLOWING UP THE INTERNET RIGHT NOW), the Tide is still a major player in the College Football Playoff picture. In fact, here's 4 Steps Alabama Needs To Take To Make The College Football Playoff.

Two quarterback systems work in the rarest of cases when one dual-threat and one traditional pocket passer put aside their egos and by into a shared snap system. That's not what the Cooper Bateman/Jacob Coker scenario in Tuscaloosa feels like. This QB controversy has people on edge inside and outside of the program. Coker has been tabbed as the starter next week. Alabama's playoff chances may hinge on Saban evaluating Coker in an easy, non-conference game against Louisiana-Monroe and coming to a final conclusion on whether it's Bateman or Coker going forward.

2. Figure Things Out On The Back End

Alabama's run defense had a sneaky good game on Saturday, holding the Rebels to a shade over three yards per carry and to under 100 yards all together. That's all well and good, but it means nothing when an opposing quarterback (Chad Kelly) gashes you for big plays ad nauseum en route to a 341-yard, 3-TD performance. The Tide are elite when it comes to stuffing the run. If they can get their secondary to cover at a clip similar to conference average from here on out, the wins could pile up.

3. Block, Block And Block Some More For Derrick Henry

Listen -- Jacob Coker and Cooper Bateman can both be very good SEC quarterbacks when in rhythm. And no, we're not downplaying just how effective the aerial attack was against Ole Miss. But, Bama needs to hitch the wagon to Derrick Henry for 25-30 carries through SEC play -- especially after he amassed 127 yards and a score against the Rebels' "Land Shark" D. He's the best running back in the nation and the offense needs to flow through him, especially with the uncertainty under center right now.

Look at this schedule in the five weeks after Bama's cupcake-fest against Louisiana-Monroe this Saturday -- at Georgia, Arkansas, at Texas A&M, Tennessee, LSU. Three of those (UGA, A&M, LSU) are bona fide SEC title contenders, one (Tennessee) is better than most people are giving them credit for, and Arkansas has a football team. There's a chance (it may be a small, but still a chance) that Bama could survive a 2nd loss after the fact if they somehow blow through this gauntlet without a loss.

Alabama's crunch time will come about three weeks before most other contenders around the nation. That's what an early-season, in-conference loss will do to ya. But, that doesn't mean that Bama can't climb back in it with a decidedly Crimson Tide-like surge.

NEXT READ: Lane Kiffin out as Alabama's offensive coordinator?