#4 Alabama vs. #2 LSU Preview And Prediction 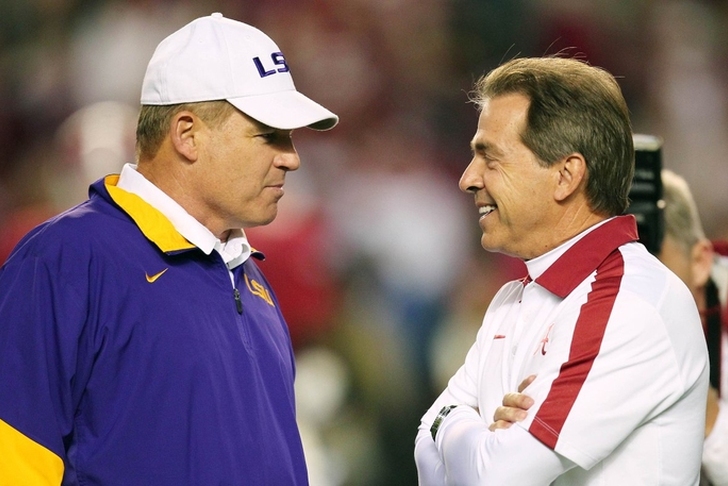 The biggest game of the 2015 college football regular season so far pits the undefeated #2 LSU Tigers (7-0, 4-0) and the #4 Alabama Crimson Tide (7-1, 4-1) in an epic Tuscaloosa showdown with huge College Football Playoff implications. Who has the advantage going into Saturday night's game? Here's our #2 Alabama vs. #4 LSU Preview And Prediction.

Here's the easiest way to put this -- whoever wins this game gains the inside track towards a College Football Playoff. In fact, you can talk us into the notion that both LSU and Alabama could survive another loss down the stretch and still make their way into the CFP based solely on the magnitude of this win. If you don't think the committee would at least consider a two-loss Bama squad, you haven't been paying attention.

LSU RB Leonard Fournette has for 150 yards or more in each of the team's seven games this season. Alabama has perhaps the most dominant run defense in all of the nation. Something's gotta give. Whoever wins this high-impact chess match will likely win the game.

What They Are Saying About The LSU Tigers:

The Make Or Break Matchup

Catching Up With Coach Miles Pre-Alabama

What They Are Saying About The Alabama Crimson Tide:

How Alabama Compares To LSU In Four Game-Deciding Areas

Can Derrick Henry Run Out Of Leonard Fournette's Shadow?

Too much Leonard Fournette will finally cause the Alabama run defense to bend, giving LSU just enough leeway to squeak out its biggest regular season win in years.