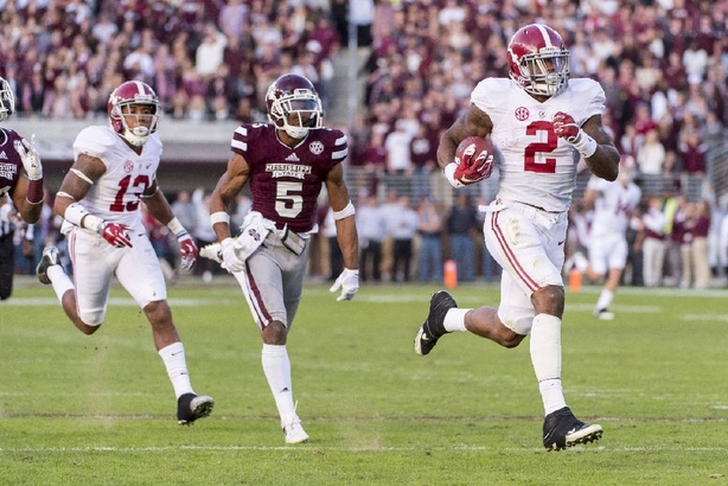 The Alabama Crimson Tide have three wins over top 10 teams in the country (at the time they played) - the only team in the country that can say that - and are coming off another dominant performance by blowing out #17 Mississippi State 31-6 on Saturday. Alabama looked like the best team in the country over the weekend, and they could overtake Clemson as top team in the College Football Playoff rankings. Here are three reasons why the Tide should be the #1 team in the country:

Not only did Henry severely outplay the previous Heisman favorite in Leonard Fournette last week, but he has now rushed for at least one touchdown in 15 straight games and has over 200 yards in three of his last four games. Henry was already knocking on the door of the Heisman conversation, but his play has catapulted him into the forefront. No one has been able to slow the 6'3", 242-pounder yet, and it doesn't look like anyone will be able to.

2) Best overall resume in the country

Ever since they lost to Ole Miss, the Tide just seem to have a different air of confidence around them. They took care of business in impressive fashion on the road against #8 Georgia (with Nick Chubb) and #9 Texas A&M, passing those tests with flying colors. Then trailing Tennessee with less than five minutes left, they made the plays they needed to down the stretch, showing the mental toughness of this team.

Of course, all of that momentum came to a head against #2 LSU, who they also blew out, and then followed that up with another blowout victory over a top 20 team. Even though they do have a loss on their resume, they've beaten (and dominated) more top teams than any undefeated team in the country. No one wants to play this team right now, and that has to count for something.

After giving up 43 points to Ole Miss in Alabama's only loss, the concern was that Alabama' defense might not be as good as previous editions. Alabama's defense is loaded with more NFL prospects than anyone else in the country - and they proved that by shutting down Georgia, Texas A&M, and Tennessee before absolutely smothering Leonard Fournette and LSU, then Dak Prescott and Mississippi State. They now look like the best defense Saban has had in a while, ranking third in the country in total defense and seventh in scoring defense.