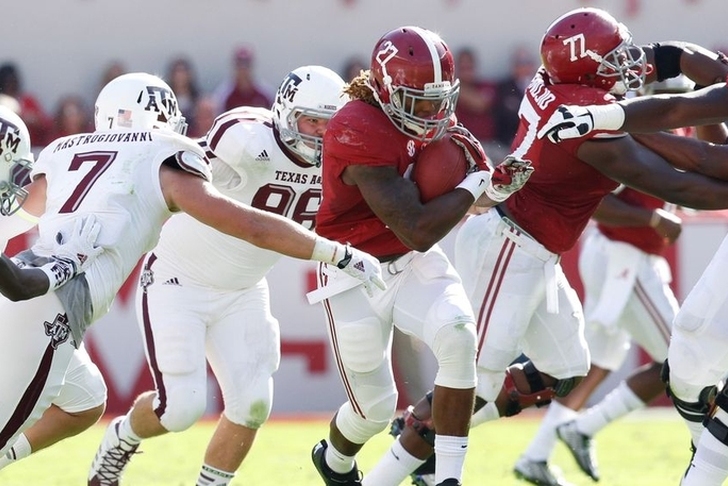 The Alabama Crimson Tide are coming off a hard-fought victory over Arkansas, and now have their second road game in three weeks against a top-10 team inTexas A&M. However, the Tide are more than capable of handling this challenge. Here are three reasons why Alabama is guaranteed to beat the Aggies on Saturday:

Coker threw for 262 yards and two touchdowns against Arkansas' vaunted defense, marking the latest in a line of impressive performances. He won't have to carry the offense with Derrick Henry and Kenyan Drake in the backfield, but his arm talent is good enough to keep opposing defenses honest.

He has also found a true go-to receiver in true freshman Calvin Ridley. He's the team leader in receptions (31), yards (385), and touchdowns (three), most of which have come in the past two games (14 catches, 260 yards, two TDs).

As long as Coker can consistently make good decisions and take care of the ball - and get it to Ridley - Alabama's offense will be extremely tough to stop and should be able to match Texas A&M's offense.

2) Last year was the blueprint

The Tide really struggled against Texas A&M under Kevin Sumlin in 2012 and 2013, but last year, Alabama showed they had figured it out and delivered a 59-0 beatdown. This year's game promises to be much, much closer, but you just don't make up a 59 point-difference in one year. Expect Nick Saban and Alabama to do a lot of the same things that were so successful last year.

The Tide's defensive line is big, deep and extremely talented with returning starters A’Shawn Robinson, Jarran Reed and Jonathan Allen leading the charge. In the linebacking corps, Reggie Ragland turned down a sure ticket to the NFL to come back and lead a unit that also features one of the biggest hitters Tuscaloosa has ever seen, top recruit Reuben Foster. Texas A&M isn't the most physical team in the trenches, meaning the Tide should be able to control the line of scrimmage and, therefore, the game.