3 Reasons Why Alabama Is Guaranteed To Beat Tennessee This Weekend 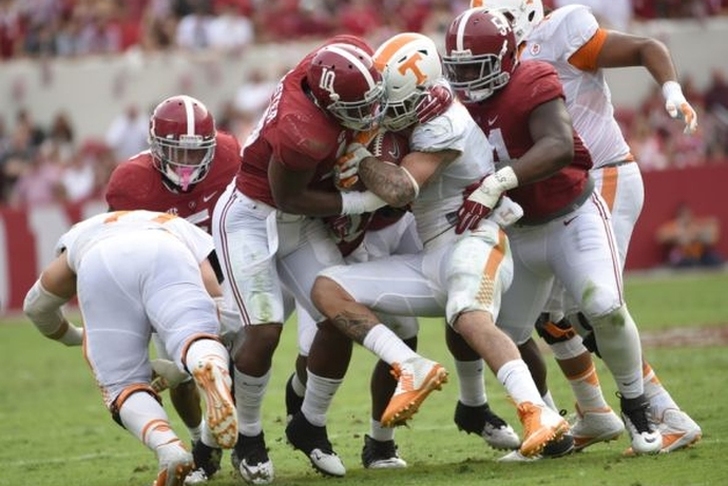 The Alabama Crimson Tide rolled through another ranked team this past weekend, blowing out Arkansas on the road. Now comes perhaps their toughest test of the season to this point, hitting the road again to take on Tennessee. Some think the Vols may come out on top, but we know better. Here are three reasons why Alabama will beat Tennessee this weekend:

3) Nine in a row
Nick Saban has never lost to Tennessee. In fact, only two of Alabama's nine straight wins have come by less than two touchdowns, showing their sheer dominance in this series. This is the best team Tennessee has had in a while, but considering their inconsistent play, Alabama figures to take a big lead - and the Tide don't relinquish big leads.

2) Alabama's defense
And this is the biggest reason why. Not only is Alabama's defense one of the best in the country at stopping opponents, they're the best at forcing turnovers - and then at turning those turnovers into touchdown. The Tide have a NCAA-high nine non-offensive touchdowns this season, including at least one in every game. Tennessee turns it over a LOT - including seven times against Texas A&M - and Alabama will take advantage.

1) Jalen Hurts, Heisman candidate
Just a true freshman, Hurts has emerged as one of the best quarterbacks in the entire country through half a season. He's completing 63.8 percent of his passes, for 1,242 yards, nine TDs and just two interceptions. A dual-threat, he also has 296 yards and five more scores on the ground, playing efficient - yet dangerous - football. Hurts puts pressure on opposing defenses on every snap, and he's only getting better every game. Considering how vulnerable Tennessee's defense is after getting shredded for 600 yards by Texas A&M, Hurts should be in for another big game.