3 Reasons Why Alabama Is GUARANTEED To Beat LSU This Weekend 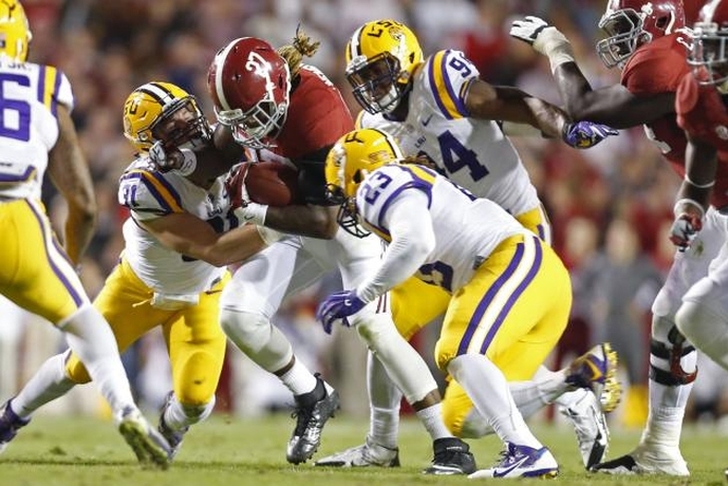 The Alabama Crimson Tide will host the LSU Tigers on Saturday in what many think will serve as a College Football Playoff elimination game. It's always exciting when these two rivals get together, but the Tide definitely have a leg up on the competition. Here are three reasons why Alabama is guaranteed to beat LSU this weekend:

Ever since they lost to Ole Miss, the Tide just seem to have a different air of confidence around them. They took care of business in impressive fashion against Georgia and Texas A&M, passing those tests with flying colors. Then trailing Tennessee with less than five minutes left, they made the plays they needed to down the stretch, showing the mental toughness of this team.

They (probably) won't blow out LSU, so knowing they have what it takes to play their best in big spots is crucial.

Alabama has won four of the last five meetins against the Tigers, and has lost just once in Tuscaloosa to LSU since 2007. Most of the games have been extremely close, defensive battles, but the Tide did blowout LSU 34-17 the last time they met in Bryant-Denny Stadium in 2013. There's no reason to think this dominance will stop anytime soon, especially given head coach Nick Saban's track record in games of this magnitude.

1) If anyone can stop Leonard Fournette, it's Alabama

After giving up 43 points to Ole Miss in Alabama's only loss, the concern was that Alabama' defense might not be as good as previous editions. While Alabama's defense isn't quite as dangerous as some of Nick Saban's previous squads, it's still a strong unit - and they proved that by shutting down Georgia, Texas A&M, and Tennessee.

They have the nation's best run defense and made life very difficult for Nick Chubb (with the exception of his 80+ yard TD run after the game was already decided). Fournette has essentially carried LSU's offense, and Nick Saban will stack the box to force quarterback Brandon Harris to beat them - and he hasn't proven he can win a game by himself yet.