3 Reasons Why Alabama Is Guaranteed To Beat Florida This Weekend 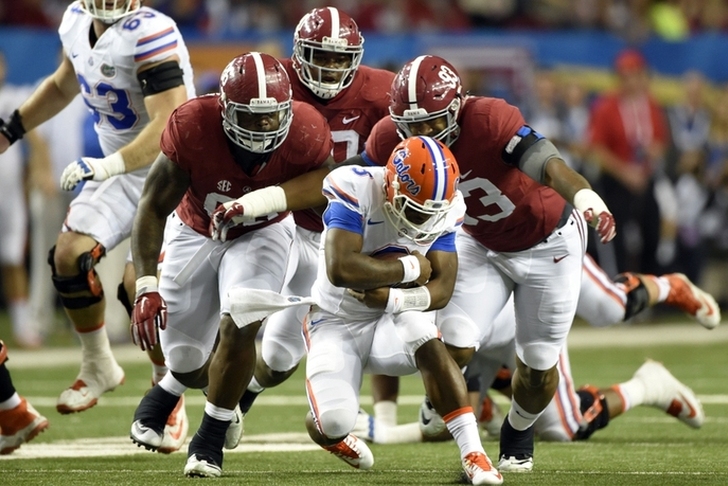 The Alabama Crimson Tide roll into the SEC Championship Game as the only undefeated Power 5 conference team in the country, all but ensuring they've already locked up a berth in the College Football Playoff. However, Nick Saban & Co. aren't looking past Florida - here are three reasons why they'll win this game:

3) Domination every single week
Some people are thinking that Alabama may slip up this week if they're focused on the playoff, but this team has shown every week that's not happening. There is only one game this season in which they haven't won by double digits. In fact, their margin of victory is over four touchdowns per game. Every week, this team comes ready to play - that's not going to change in their biggest game of the season so far.

For starters, the Tide have more talent than anyone else. Defensive ends Jonathan Allen and Tim Williams, linebacker Rueben Foster and cornerback Marlon Humphrey are all projected to be first round picks in the NFL draft. Furthermore, Alabama has turned that talent into an insane amount of production. They haven't allowed a touchdown in four straight games, have held five opponents to 10 points or less and lead the country in both points and yards allowed per game - despite playing perhaps the toughest schedule in the country.

Oh yeah, and they've scored and eye-popping 12 non-offensive touchdowns this season. Florida won't be able to move the ball much in this game.

1) Nick Saban's track record
Saban's record at Alabama speaks for itself, and what he has done in the SEC Championship Game is just as good. He's 4-1 in the conference title game since taking the job, with the only loss coming in 2008 to a Florida national championship team led by Urban Meyer and Tim Tebow. Since then, the Tide are 4-0 in the SEC title game, outscoring opponents 135-69 combined. He'll have this team ready to play.