3 Reasons Why Alabama Is Guaranteed To Beat Arkansas This Weekend 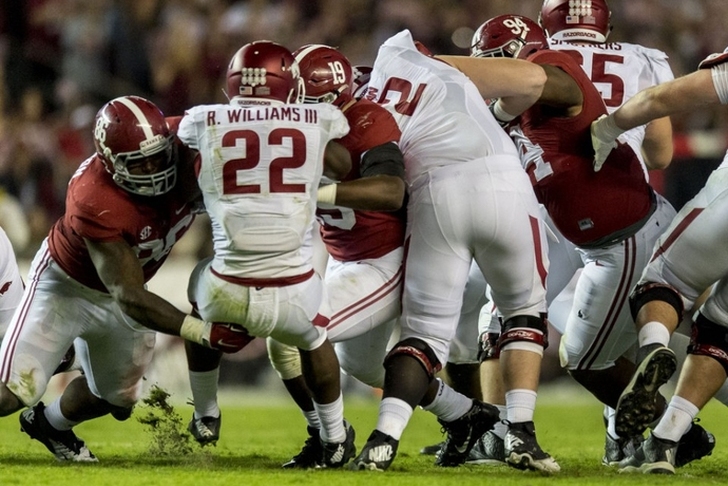 The Alabama Crimson Tide are the unquestioned No. 1 team in the country, but they'll face perhaps their toughest test of the season this weekend against Arkansas. The Razorbacks have always played Alabama tough under Bret Bielema, but Alabama has won eight straight games in the series. Here are three reasons why they'll extend that streak:

3) Jalen Hurts' playmaking ability
A true freshman, Hurts has looked great in every game this season. He's completing 62.2 percent of his passes, for 989 yards, 7 TDs and one pick. A dual-threat, he also has 276 yards and three scores on the ground, playing efficient - yet dangerous - football. Hurts puts pressure on opposing defenses on every snap, and he's only getting better every game.

2) Arkansas is overrated
Don't believe me? Three of the Razorbacks' four wins have come against Louisiana Tech (by one), Texas State and Alcorn State, while their big win came on the road against a TCU team that has fallen from the rankings. The Razorbacks also nearly lost that game after giving up a huge 4th quarter comeback, then also fell apart late against Texas A&M. Arkansas has proven they can't hang with their major competition for four quarters, and that'll show again on Saturday.

1) Oh, that defense
Defensive ends Jonathan Allen and Tim Williams, linebacker Rueben Foster and cornerback Marlon Humphrey are all projected to be top 20 picks in the NFL draft. They've held four of their five opponents to 10 points or less, ranking in the top 10 in the country in both points and yards allowed per game - despite playing one of the toughest early season schedules in the country. Oh yeah, and they've scored five defensive touchdowns this season. Any questions?