3 Reasons Why Alabama Is GUARANTEED To Beat Arkansas This Weekend 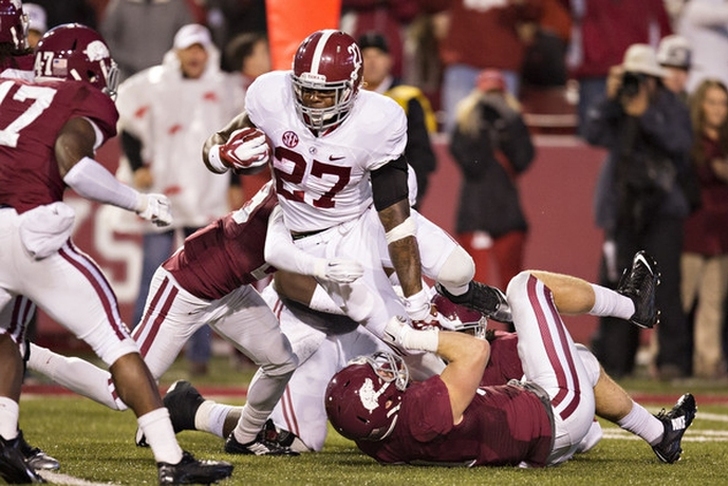 The Alabama Crimson Tide are flying high after their dominant victory over Georgia last weekend, and will look to continue that against Arkansas on Saturday. Here are three reasons why they'll do just that:

Alabama has a quarterback! Coker threw for 190 yards and a touchdowna while rushing for 26 more yards against another score against the Bulldogs' vaunted defense. He won't have to carry the offense with Derrick Henry and Kenyan Drake in the backfield, but his arm talent is good enough to keep Arkansas' defense honest. As long as he can consistently make good decisions and take care of the ball, Alabama's offense will be extremely tough to stop.

The Razorbacks have struggled without starting running back Jonathan Williams this season, ranking 87th in the country in scoring offense. They've yet to score more than 24 points in a game this season, while Alabama hasn't scored less than 34 points - and Arkansas isn't going to turn things around this week because of...

The Tide's defensive line is big, deep and extremely talented with returning starters A’Shawn Robinson, Jarran Reed and Jonathan Allen leading the charge. In the linebacking corps, Reggie Ragland turned down a sure ticket to the NFL to come back and lead a unit that also features one of the biggest hitters Tuscaloosa has ever seen, top recruit Reuben Foster.

This front seven is prime time through and through, and that will be a huge factor in slowing down Arkansas' rushing attack, led by Alex Collins. The Razorbacks' offense is predicated around a dominant rushing attack, and no running back is dominant against the Tide - they even contained Nick Chubb last week outside of his 83-yard TD run he had in garbage time. Arkansas' offense will sputter without being able to move the ball consistently on the ground.