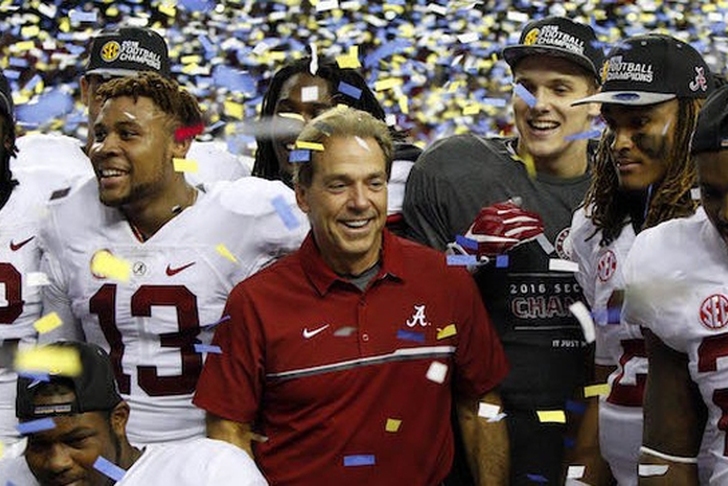 The Alabama Crimson Tide rolled into the College Football Playoff as the only undefeated Power 5 Conference team in the country, and are looking to continue that streak against Washington. Simply put, the Huskies don't pose much of a threat for keeping Alabama out of the national championship game. Here are three reasons why Alabama is guaranteed to win the game:

3) Washington is unproven
The Huskies have played three games this season against teams that finished the year ranked in the College Football Playoff selection committee's final rankings, and it's safe to say they weren't exactly impressive despite having a 2-1 record in those games. They were dominated at home by USC (a team Alabama beat by nearly 50 points), beat Stanford in the midst of them losing three games in a four-game stretch, then beat Colorado in the Pac-12 Championship Game with their quarterback, Sefo Liufau, dealing with an ankle injury that severely limited him and their offense. They haven't faced anything like what the Tide will throw at them.

2) Alabama's dominant defense
The biggest thing Washington will have to overcome is Alabama's defense - which no one has been able to do this season. The Tide simply have more talent than anyone else. Defensive ends Jonathan Allen and Tim Williams, linebacker Reuben Foster and cornerback Marlon Humphrey are all projected to be first round picks in the NFL draft. Furthermore, Alabama has turned that talent into an insane amount of production. They have held five opponents to 10 points or less and lead the country in both points and yards allowed per game - despite playing perhaps the toughest schedule in the country.

Oh yeah, and they've scored and eye-popping 14 non-offensive touchdowns this season, which really puts them at the top.

To make matters worse for Washington, quarterback Jake Browning has struggled in their biggest games, throwing for just a combined total of 587 yards, six touchdowns and two interceptions in those three games mentioned above. I imagine he'll have a hard time dealing with this group, too.

1) Nick Saban's track record in big games
No one does a better job of preparing their team for these kind of games than Nick Saban. On top of seeking his sixth career national championship (his fifth at Alabama), he is 7-3 in bowl/playoff games with the Tide, including a 5-1 mark when playing for a national title (3-0 in BCS title games, 2-1 in CFP games).

Furthermore, Alabama is 8-0 against ranked teams this season by an average of 24.25 points per game. In all, they have won 15 straight games against ranked opponents, and 21 of the last 24 over the past three seasons.

Anyone doubt they're suddenly going to have a hard time playing good teams when they face the Huskies?