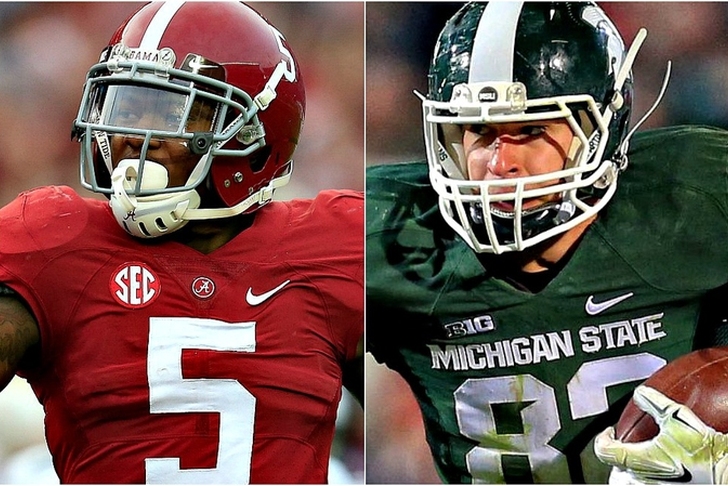 The 2015 Cotton Bowl is the biggest one yet to hit the Lone Star State, as the #2 Alabama Crimson Tide square off against the #3 Michigan State Spartans in the second-ever College Football Playoff semifinal round. The Spartans were left for dead after an upset loss to Nebraska on November 7th, but key wins over Ohio State and Iowa (in the Big Ten title game) over a four-game winning streak vaulted MSU into the Big Dance. Alabama looked to be in trouble after a home upset loss to Ole Miss early in the season, but ten straight wins and an SEC title have them locked and loaded for their second CFP performance.

Who's got the edge in this New Year's Eve showdown for the ages? Here's our game preview & prediction.

Historical Significance:
The Michigan State Spartans haven't won a national title since 1966. The program's six national championships came in a sixteen-year span from 1951-66. MSU came close to the mountaintop in 2013, narrowly missing the BCS title game before finishing off with a #3 AP rank and Rose Bowl berth.

As for Alabama, a victory in this College Football Playoff would be another feather in the cap of college football's current dynasty. This would be the Crimson Tide's fourth national title since 2009, and they've already put together their eighth straight double-digit season under Nick Saban. This is just another go-around for the CFB equivalent of the New York Yankees.

What They're Saying About The Michigan State Spartans:
ESPN's Herbstreit: MSU must stand up to Alabama
Alabama's wary of Michigan State's ability to fight to finish
Connor Cook has a message for his haters

What They're Saying About The Alabama Crimson Tide:
Alabama CB Troy Brown sent home
Tide defenders want to send Kirby Smart out a winner
Alabama players say Nick Saban's "hilarious" but are afraid to laugh at his jokes

Key To The Game:
On offense, this shakes out to a battle between MSU QB Connor Cook and Alabama RB Derrick Henry. Teams have been attempting to take away the Spartans' running game all year, forcing Cook to make throw after throw in hopes of him making a mistake. He's thrived under that pressure for most of the year, and he'll be in similar circumstances against the most dominant front seven in college football.

As for Alabama, they'll be riding Heisman Trophy winner Derrick Henry like they have all year. The question here is workload. With a month off, Henry's body should be partially recuperated from an intense 339-carry workload over the course of the season. However, will that leave some rust on Henry's gears heading into this game? Michigan State's #1 task is to keep Henry contained, shooting gaps to beat him between the tackles while containing the edges with solid assignment adherance.

Prediction: Alabama wins 27-21
Michigan State has been living on borrowed time all year, including the team's improbable punt block return for a TD with time expiring in Ann Arbor. Nick Saban-coached Alabama teams are built to snuff out opposing team's luck with relentless pressure on both sides of the ball. MSU will hang in longer than most expect, covering the spread. But, Alabama's on their way to another national title game.