2016 Preseason Rankings: See Where Alabama Is Ranked In Way-Too-Early Polls 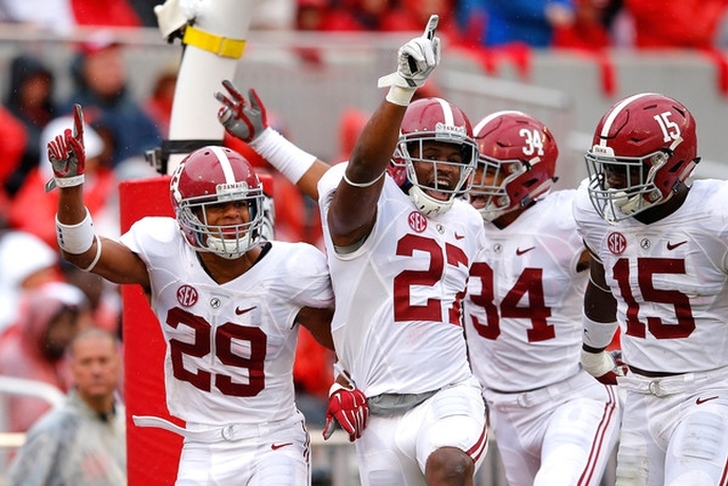 The Alabama Crimson Tide won their fourth title in the last seven years by beating Clemson, and even with a number of key starters either graduating or entering the NFL Draft, many expect the Tide to be one of the top teams in college football football again in 2016. Here's how they rank in the way-too-early top 25 polls published by major publications:

Chat Sports
Ranking: 3
Breakdown: "Yes, Alabama is losing a lot of talent and star power, but they do that every year. Head coach Nick Saban has a new group of players that are ready to step in and become big-time impact players, headlined by wideout Calvin Ridley and cornerback Minkah Fitzpatrick. Expect the Tide to be one of the nation’s top teams again in 2016."

USA Today
Ranking: 2
Breakdown: "Another year, another push for the national title. Alabama will reload across the board, with the only concerns over another competition at quarterback and the change at defensive coordinator from Kirby Smart to Jeremy Pruitt."

ESPN
Ranking: 2
Breakdown: "The Crimson Tide are losing a ton of talent on defense, along with defensive coordinator Kirby Smart, who was named Georgia's coach. But when hasn't Nick Saban reloaded on that side of the ball? He hired former Georgia defensive coordinator Jeremy Pruitt to replace Smart. The bigger question might be whether freshman Blake Barnett is ready to take the controls of the offense in 2016. He may have to do so without Heisman Trophy winner Derrick Henry, who is probably turning pro early. Alabama opens the season against USC in Arlington, Texas, and also plays SEC road games at Ole Miss, Arkansas, Tennessee and LSU."

CBS
Ranking: 2
Breakdown: "Early draft entries could gouge the lineup. Does it matter? The Tide will merely reload and make another championship run. This season's scout teamer Blake Barnett has a good chance to take over for Jake Coker."

Sports Illustrated
Ranking: 3
Breakdown: "As long as the Crimson Tide continue to recruits as well as they do, it’s impossible to not consider them top-tier contenders for the national championship. Alabama’s most recent recruiting classes have ranked second (2015), first (’14), fourth (’13) and second (’12), according to Scout.com. On offense, the Tide will once again have to find a new starter at quarterback, and Heisman-winning running back Derrick Henry will surely leave early for the NFL. Center Ryan Kelly’s graduation is also a significant loss. The defensive departures should be even more severe with A’Shawn Robinson, Jarran Reed, Jonathan Allen, Reggie Ragland, Cyrus Jones and Eddie Jackson all possibly moving on to the NFL—not to mention coordinator Kirby Smart’s move to Georgia.

"But Jeremy Pruitt should keep the Tide’s defense playing at an elite level, and the success of this year’s defense was largely due to its incredible depth. Former five-star recruit Da’Shawn Hand should get more exposure on the defensive line, Reuben Foster, Ryan Anderson and Tim Williams leave the linebacking corps in excellent shape, as do Marlon Humphrey and Minkah Fitzpatrick in the secondary. True freshman running backs Bo Scarbrough and Damien Harris both showed potential to replace Henry in the long line of Alabama marquee backs. And whoever emerges at quarterback will play in front of a line anchored by left tackle Cam Robinson and get to throw to star receiver Calvin Ridley. The Alabama dynasty is rolling along."

FOX
Ranking: 3
Breakdown: "The Tide must reload at several areas, but that’s true every year. One difference is they could be very young on offense, as freshman QB Blake Barnett and classmate Bo Scarbrough may take over for Jake Coker and Derrick Henry. But top receivers Calvin Ridley and ArDarius Stewart return. Defensively, ’Bama will be inexperienced at linebacker, but the next wave up front and in the secondary saw plenty of action this year."

Bleacher Report
Ranking: 4
Breakdown: "The full extent of Alabama's mass exodus to the NFL isn't yet known, but it will be substantial. Derrick Henry, Reggie Ragland, Jake Coker and Jonathan Allen are just a few key players who are graduating or expected to leave early for the pros. But we've seen this happen time and time again at Alabama, and head coach Nick Saban always reloads.

"Cooper Bateman will likely take over at quarterback for Alabama, with sophomore running backs Bo Scarbrough and Damien Harris battling it out for the carries at running back. Unfortunately for Alabama, there will be no time to ease in the new starters. The Tide kicks off the season with a showdown against USC in Arlington, Texas, and then travels to Ole Miss in Week 3."