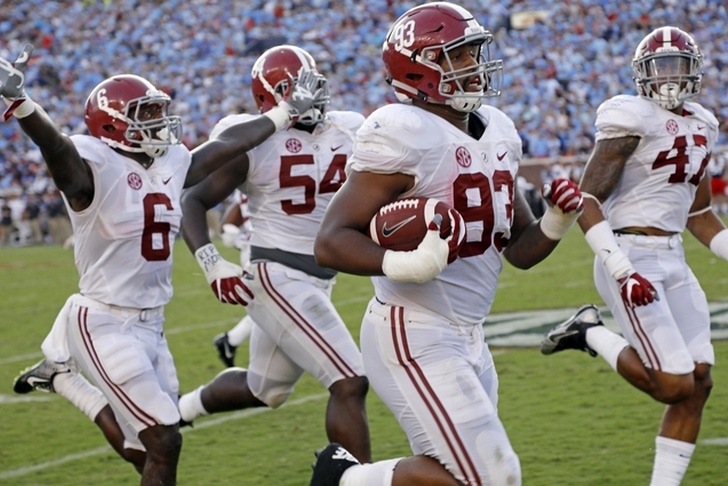 The Alabama Crimson Tide have been tested time and time again this season, and every time, they have passed with flying colors. Texas A&M was poised to provide the toughest test yet, but Alabama's defense stepped up and led them to a convincing 33-14 win.

It was a shaky start for the Tide, who had over 300 yards of offense in the first half, but only managed to find the end zone once after stalling in the red zone on several occasions. With Alabama leading 13-0, Texas A&M finally got something going offensively on their final drive of the half, going 80 yards in less than two minutes.

The Aggies also got the ball to start the third quarter, and they took advantage. In just over two minutes this time, quarterback Trevor Knight found Christian Kirk for the 25-yard touchdown - giving them a shocking 14-13 lead.

However, that was where Texas A&M's momentum stopped. Alabama took the lead back with a short touchdown pass from Jalen Hurts to Calvin Ridley, then put the game away with defensive lineman Jonathan Allen picking up a fumble and returning it 37 yards to put the Tide up 26-14:

Hurts added a 37-yard touchdown run in the fourth quarter to add to Alabama's lead. He finished with 166 passing yards with two touchdowns and two interceptions, along with 91 yards rushing and that touchdown. Running back Damien Harris also played well with 128 yards on 17 carries.

The Aggies return home next weekend to host New Mexico State. Alabama has a bye week next weekend before facing LSU in Baton Rouge on Nov. 5.