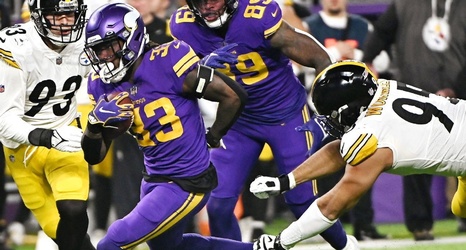 MINNEAPOLIS - In his first game back since dislocating his shoulder in San Francisco two weeks ago, Minnesota Vikings running back Dalvin Cook had the best first half of his career as he topped 100 yards rushing with a 29-yard touchdown against the Pittsburgh Steelers.

He later added a seven-yard score as the Vikings' ground game dominated.

With the Vikings just outside of Pittsburgh's red zone with 10:02 to play in the second quarter, Cook took a handoff from Kirk Cousins and ran 29 yards down Minnesota's sideline -- untouched -- into the end zone to help his team jump out to a 16-0 lead.