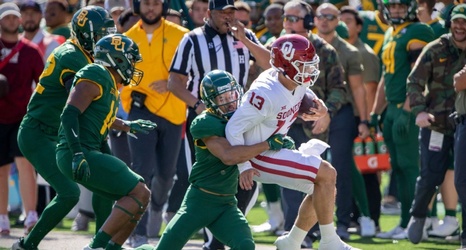 Baylor fans were so excited that their No. 13 Bears beat No. 8 Oklahoma 27-14 that they stormed the field twice.

Assuming the game was over, throngs of fans who had been perched on walls waiting for the final seconds to tick off the clock rushed the field, not realizing Baylor coach Dave Aranda had called a timeout with three seconds left, up 24-14, to kick an extra point.

Aranda's reasoning: He wanted to get additional points in case there was a tie among 2-loss teams in the Big 12 title race, because point differential between teams is the third tiebreaker in the league's rules.