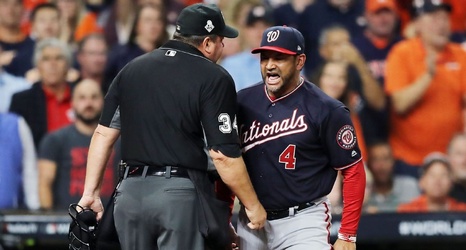 HOUSTON -- Washington Nationals manager Dave Martinez was ejected from Game 6 of the World Series on Tuesday night after a controversial runner interference call in the top of the seventh inning.

With the Nationals leading the Astros 3-2 and a runner on first base with none out, Trea Turner hit a little dribbler in front of pitcher Brad Peacock. Peacock's throw to first base hit Turner as first baseman Yuli Gurriel stretched for the ball and Turner made his final step for first base.

The ball rolled away from Gurriel, and Yan Gomes reached third base while Turner went to second, but plate umpire Sam Holbrook called Turner out for runner interference.