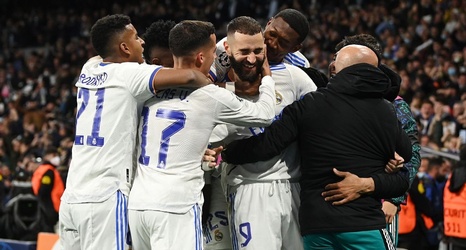 Karim Benzema stole the show once again as Real Madrid did just enough to eliminate Chelsea from the Champions League at the Santiago Bernabeu on Tuesday night with a 5-4 aggregate win in their quarterfinal tie.

Carlo Ancelotti's side came into the match with the upper hand after riding a Benzema hat trick to a 3-1 win in the first leg at Stamford Bridge and, despite losing the second leg 3-2 to the Champions League holders, they advanced on aggregate.

Mason Mount put Chelsea ahead with 15 minutes played to give them hope of turning the tie around as the visitors dominated the first half.