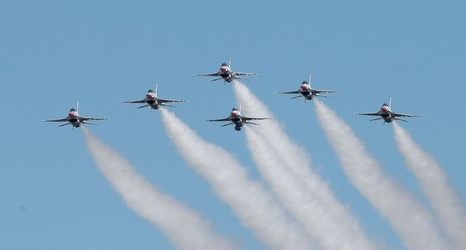 The Air Force Academy has canceled all athletic events due to a federal government shutdown that began overnight.

"Due to the government shutdown, all Air Force Academy home and away intercollegiate athletic events have been cancelled until further notice," the academy said in a statement. "In the event a solution is reached, the Academy will work to reschedule as many missed events as possible."

Among the events scheduled for Saturday were men's and women's basketball games against Fresno State. The Falcons also had been set for competition in men's swimming, women's swimming, men's ice hockey, men's gymnastics and rifle

Neither the Army nor the Navy has announced how it will handle the shutdown, which began at midnight ET when U.