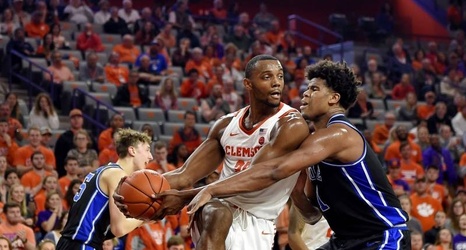 Another Top 5 men's college basketball team fell to an unranked opponent as Clemson beat No. 3 Duke 79-72 on Tuesday.

Aamir Simms and Tevin Mack propelled the host Tigers to a win at Littlejohn Coliseum. Simms had 25 points, nine rebounds and five assists on 10-of-15 shooting. Mack's 22 points came on 10-of-14 shooting, and he also added nine boards and a pair of blocks.

Clemson shot 56.6 percent from the field as a team.