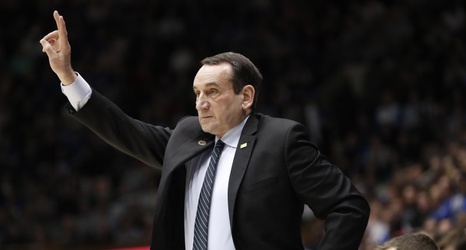 Mike Krzyzewski confirmed Thursday the 2021-22 season will be his final campaign as the head coach of the Duke Blue Devils.

The 74-year-old held a press conference to announce his retirement at the conclusion of the upcoming season.

Krzyzewski engaged in a long-running tradition at Cameron Indoor Stadium by walking to the podium as Cascada's song "Everytime We Touch" played over the speaker system.

I don’t know what I was expecting but it certainly wasn’t Mike Krzyzewski entering his retirement press conference dancing to Everytime We Touch by Cascada pic.twitter.com/yfkWgMITcV

Coach K said his decision to walk away has nothing to do with the potential changes to college athletics regarding name, image and likeness rules.