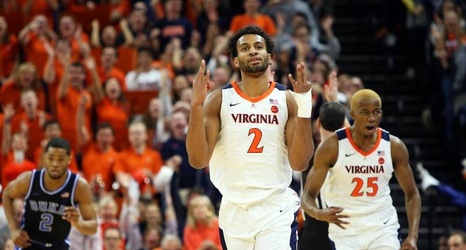 No. 7 Duke suffered its third defeat in four games in a 52-50 loss at Virginia on Saturday.

It's the sixth loss of the season for the Blue Devils—their fifth in conference play—and knocked them out of a three-way tie for the ACC lead.

Duke had a chance to go ahead with 40 seconds left in the game and trailing by one. But head coach Mike Krzyzewski let his players slow the offense, leading to a jump ball with the possession arrow favoring Virginia and 15.8 seconds remaining.

After the Blue Devils immediately fouled on the inbounds play, the Cavaliers missed the front end of a one-and-one, which gave Duke one last chance for the tie.