Projecting The NCAA Tournament Seeding For Each Team In The ACC 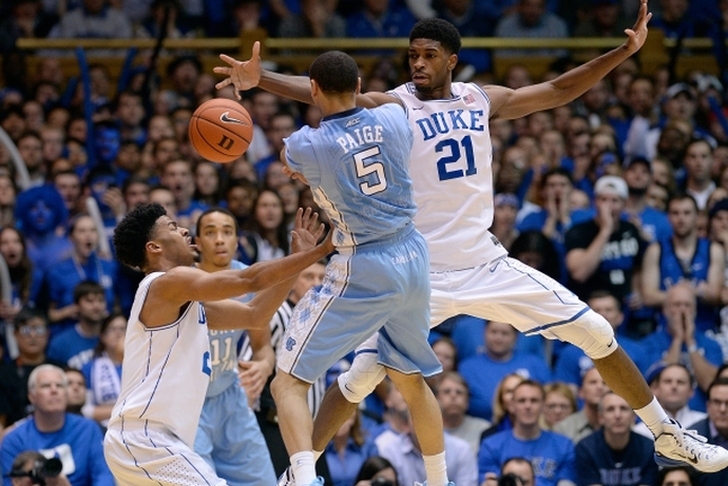 The ACC is one of the best basketball conference in the nation. The conference has five teams ranked in the Top 25 at the moment and seven teams in position to make the NCAA Tournament. With the Big Dance nearly here, it's time to project just what seed the ACC members will get on Selection Sunday.

We're only including the teams that have a real shot at making the tournament right now. Teams like Clemson and Virginia Tech are too far outside the bubble at the moment to merit making the list. If they make a deep, deep run the ACC Tournament, perhaps they'll have a chance. Wake Forest and Boston College aren't making the tournament this year, so we won't discuss them. Louisville would have made the Big Dance, but elected to self-impose a postseason ban this year. With all that out of the way, let's project the NCAA Tournament seeding for the ACC.

Duke has rallied after a mid-season slump, although a loss to Pittsburgh won't help their seeding. An ACC Tournament championship could get them as high as a No. 2 seed. For now, Duke has the makings of a No. 4 seed.

Miami doesn't quite get the same love that Virginia and UNC does, but the Hurricanes were just one game from getting a share of the ACC regular season title. Miami could get a No. 1 seed by winning the ACC tourney, but losses to Clemson, NC State, and Northeastern hurt their chances. Miami shouldn't end up any worse than a No. 3 seed, with a No. 2 spot the most likely.

The winner of the ACC Tourney will likely be a No. 1 seed. The Tar Heels look like the favorites to win the ACC and they'll be a serious Final Four threat. Brice Johnson has played great this season and should continue that during March. If UNC comes up short in the tournament, a No. 2 or even No. 3 seed is a possibility, depending on what happens with other top teams around the country. For more March Madness coverage, download the Chat Sports Android and iPhone app.

Notre Dame is likely in, but the Fighting Irish are trending the wrong direction right now. They've lost three of their last five, including games against Florida State and Georgia Tech. That's going to hurt their seeding, unless they can rebound in the conference tournament. A strong finish could boost the Irish to a No. 6 seed, but something in the No. 7 or No. 8 range is more likely right now.

Pitt started the year 14-1, but the Panthers have come back down to earth against better competition. While the Panthers should be in the tournament, winning a game or two in the ACC Tournament would help their seeding. A No. 8 or No. 9 seed seems like Pittsburgh's destiny.

The Orange are on the bubble at the moment, with several quality wins. Barring a first-round loss in the ACC Tournament, the Orange should go dancing this season. A No. 9 or No. 10 seed is the best bet for Syracuse right now.

Much like UNC, UVA has Final Four potential. If they win the ACC Tournament, Virginia should end up as a No. 1 seed. The Cavaliers defense remains great, but the offense isn't always at the same level. Barring an ACC title run, a No. 2 seed seems likely for Virginia.